I arrived in Troutdale (exit 50 off of I-81) and went straight through to Va Route 603, which was the end of our hike this year. On the way, as the cars behind me peeled off in different directions, I realized I was being followed by both Compass and Moaning Trout! This was the first (and probably only) time where everyone arrived at the destination point at the exact same time. Amazing. We said our hellos, dropped off our cars at the trail end and made our way to Abington to check into the hotel and also to eat.

The hotel was situated on a hill, the bottom of which being home to a brick oven pizza place called Moon Dog. After seeing beers on tap when we drove by, we all agreed that this was our place. We got two pizzas and three pitchers of local draft beer (one from Damascus Brewery, which was just down the street). I characterized the pizza as “wonderful,” while Moaning Trout insisted it was just okay. In either case we all left the place satisfied.

We woke to a 6AM alarm and quickly ate breakfast in the hotel lobby. Moaning Trout saved a hotel-provided peanut butter packet and a lemon juice packet for later use on the trail. We quickly gathered out things and met Factor in the parking lot to depart for Damascus.

Upon arriving in Damascus we congregated near the stream, stretching and yawning. Compass and Factor amused themselves by trying out an electric power-assisted bike on the sparsely populated roads of the tiny hiking town. After a short stop in the outfitters to get Firestarter a beanie, we were off. Dreamer had to double back a quarter mile to retrieve his hiking poles at the front of the store, bumping up his total mileage to 17 for the day. 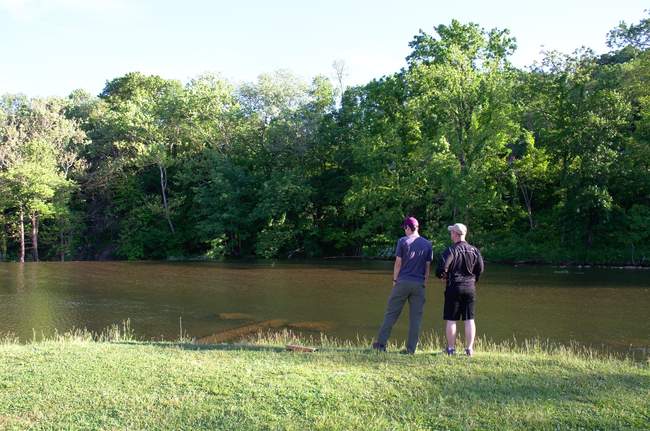 Moaning Trout and Compass check out the waters in Damascus 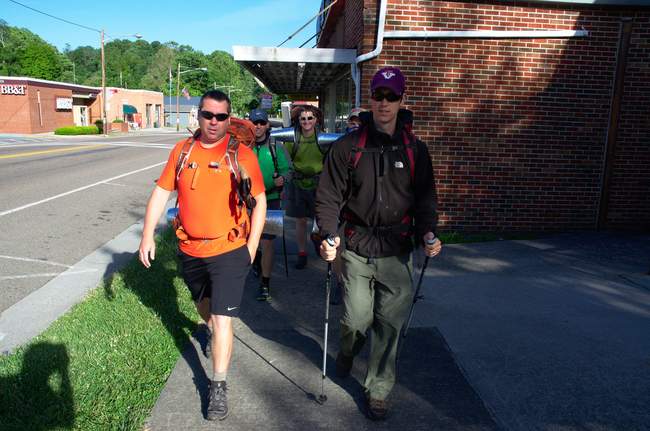 We depart from Damascus, optimistic and full of energy

Starting from Damascus the trail paralleled the Virginia Creeper Trail. Being such a beautiful weekend, there were dozens upon dozens of bicycles being carted back and forth in van trailers. Seeing all this gives me the notion that the bike business is big business here. There’s all manner of stickers, hats, and other sundry available in every window, it seems. It almost eclipses the AT paraphenalia. Almost.

The trail bent into the woods and climbed steeply towards the Cuckoo, then veered sharply back down again as if playing with us. To make matters worse the creeper was usually visible to our right throughout the hike. With its flat and even slope and laughing people it made the AT seem barbarian by contrast. We joked that we’d just take the creeper as a shortcut to our destination. 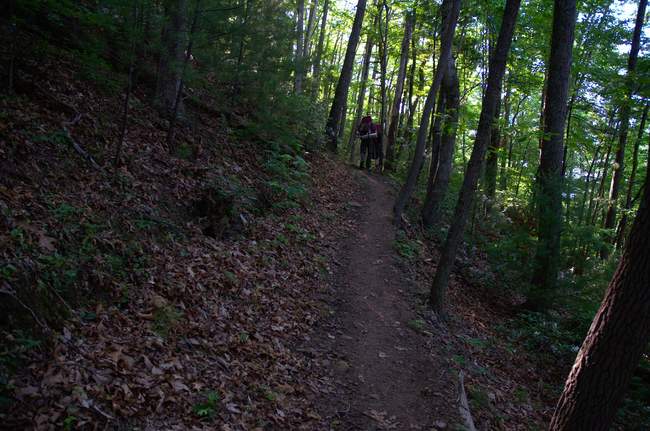 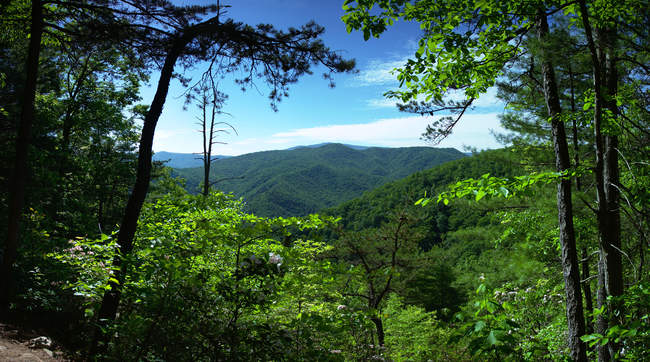 Our first overlook after some hard climbing

After a brief stop to check out the fishing water (with no success) we delved into more wilderness. The going was slow and rocky, with many roots to turn your ankles upon. We were targeting Saunders shelter for lunch, and in the interim we spaced out on the trail such that Firestarter and I became separated from the main pack. I eventually made it slightly ahead of him before encountering the rest of the group hanging out on a rock outcrop near the entrance to the Saunders side trail. Instead of going up to meet them, I opted instead to wait for Firestarter before heading to Saunders.

We ate lunch with little fanfare and continued on, not knowing that there were two entrance paths to Saunders and we had become separated from the main group. We figured that they’d catch up to us even if we’d taken a different way, but we didn’t know that they planned to fish at Beartree Lake, which was on the next section of the trail. Unfortunately we missed the turn for the lake and ended up waiting for the others for an hour by Whitetail Laurel Creek. On the plus side I got the chance to catch up with Firestarter about what was going on in his life for a bit. 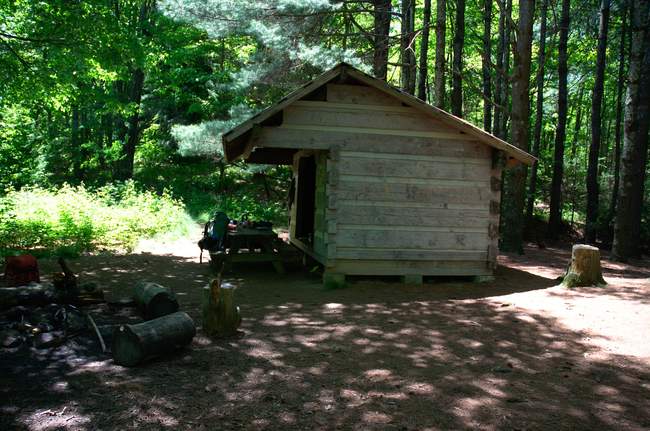 Saunders Shelter, where Firestarter and I got separated from the group 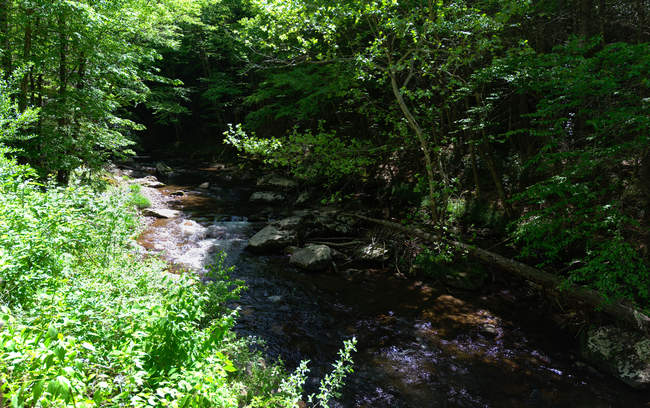 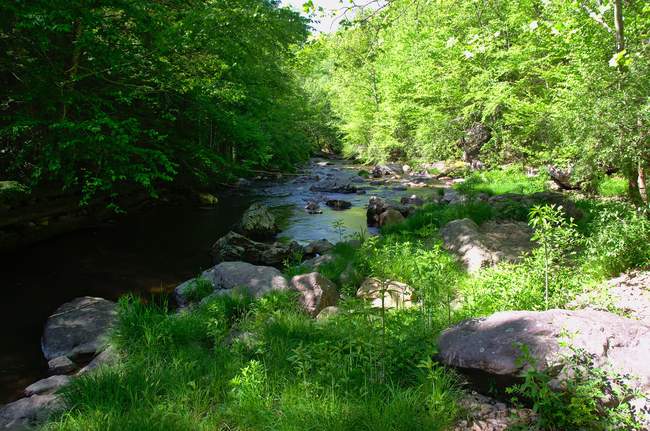 While waiting for the others to show up, w sites of Whitetop Laurel Creek 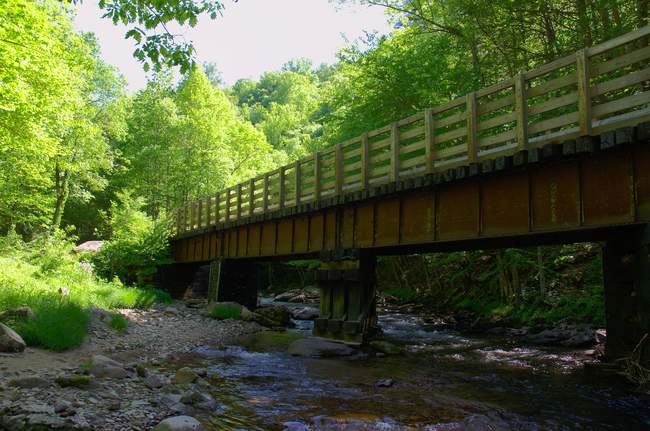 The trestle at Whitetop 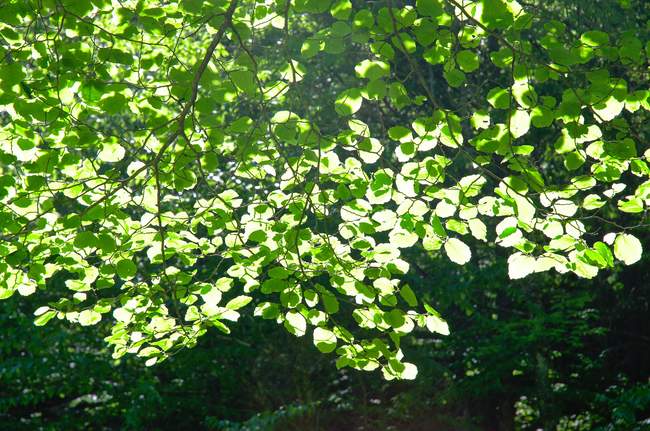 The sun is out in its fullest, highlighting the uber-green leaves 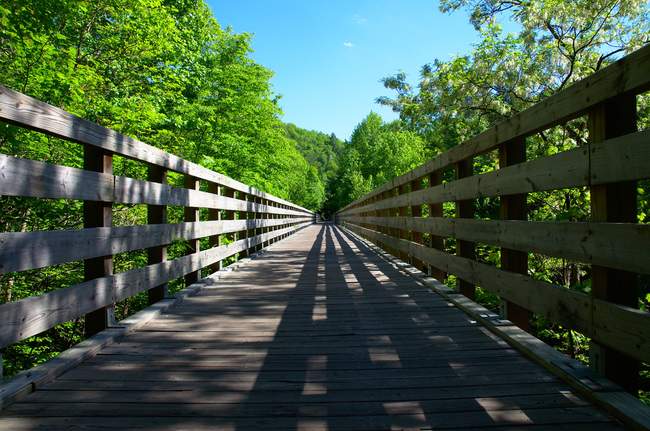 Another trestle along the Virginia Creeper Trail

After waiting long enough we departed for Lost Mountain Shelter, which was our final destination for the day. We were apprehensive about the elevation profile, but in reality the trail was very well graded. We arrived in style and quickly set up camp. In the time before the rest of us arrived we got to know our camp mates. We met U-haul, a German who cranked out the miles; Rigga, whom I’d met briefly earlier at Saunders; and Dixie, a petite Tennessee woman with a tell-it-like-it-is attitude. The rest of our group arrived about 45 minutes later and we all had a warm dinner. 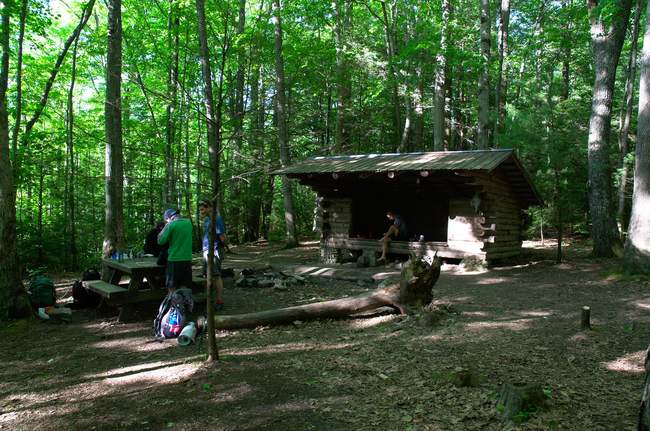 Everyone has arrived at Lost Mountain Shelter

As we climbed into our hammocks after sitting by the fire for a while, we all prepared for the drop in temperature. It didn’t come for a couple of hours. I can’t speak for the others, but I had a sweaty and fitful first half of the night. I’d brought my 15-degree bag in anticipation of the cold that hadn’t yet arrived! Only when the drop in temp actually occurred after midnight did I fall into a deep sleep with my feet still throbbing.