I always try to get a “tune up” hike in during March. It’s a chance for me to make sure that I’ve got the right suite of equipment for the upcoming Memorial Day hike. Despite doing this hike-then-camp stuff for going on a decade now, I somehow always end up coming back with some lessons learned. That’s life, y’know?

This time around I went back to one of my favorite local places - Weverton Cliffs - with my buddy Jerry from work. Jerry had recently purchased a hammock and wanted to give it an extra spin, having used it only once the weekend before. We departed from my house at around 12:30 with a plan to hike around 8 miles one-way.

It being a wonderfully sunny day, Harper’s Ferry was jam packed with people. There was a nice breeze blowing through the town, and it carried us right across the bridge and onto the C&O towpath on the other side. We waved to the turtles and plodded away on the most boring part of the hike. After 3 miles of dead-even trail, we abruptly turned left and marched up the mountain. It didn’t take very long before we arrived at the cliffs. Once there, we chatted with the other folks that were also hanging out. 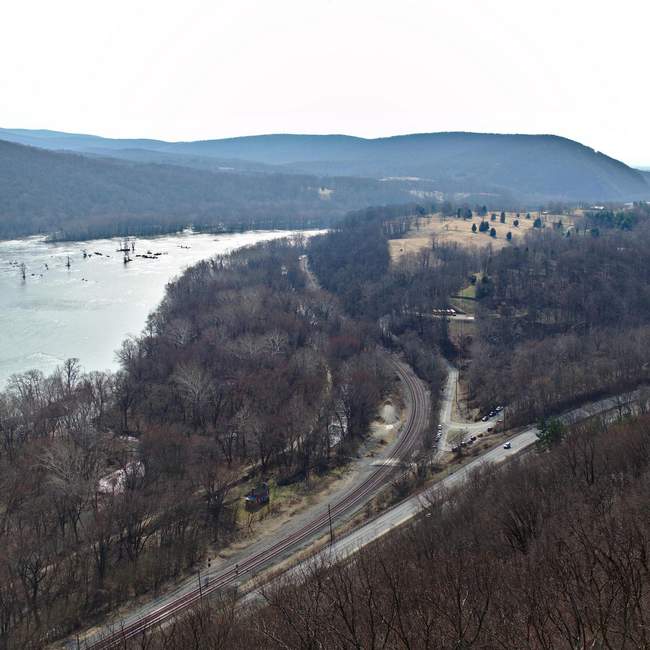 Mid-afternoon glance down on the park and ride.

Jerry wanted to hike a bit more, so we put the cliffs on hold for a bit to visit the Ed Garvey shelter. Even though I thought it was only a mile or so away, in actuality it was about three. Once there we met a nice family with a gigantic mastiff named Katahdin. I read the trail log and Jerry explored. Before too long it was time to get back to the cliffs to set up for the night.

Upon climbing into my hammock after setting up, I noticed my first mistake: I’d tied up to a tree that was too small. I was bobbing too much vertically, so I switched to another tree and called it complete. After that, I settled in for some couscous for dinner. Bringing a little bit of olive oil to butter it up worked really well as usual, so I will certainly continue that practice in May. One key thing that we both learned was to put the oil in AFTER the boil, else you’ll risk a messy boil-over. Jerry gave the rocks some garlic and herb spices to taste because of that.

The couscous is almost ready, thanks to my MSR Pocket Rocket! 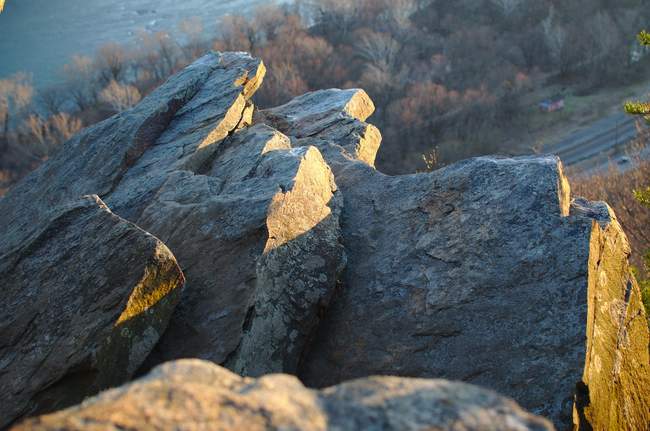 The afternoon sun hits the rocks at an angle.

We hung out and watched the sun set before heading back up to camp. I took in the panoramic view from the lower cliffs.

The view from Weverton Cliffs. 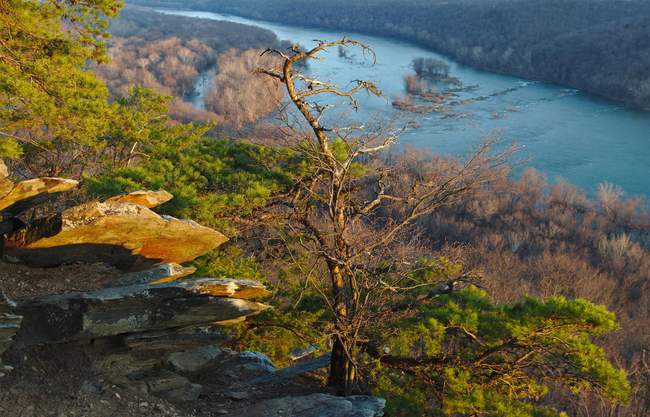 I just love the look of this old tree. 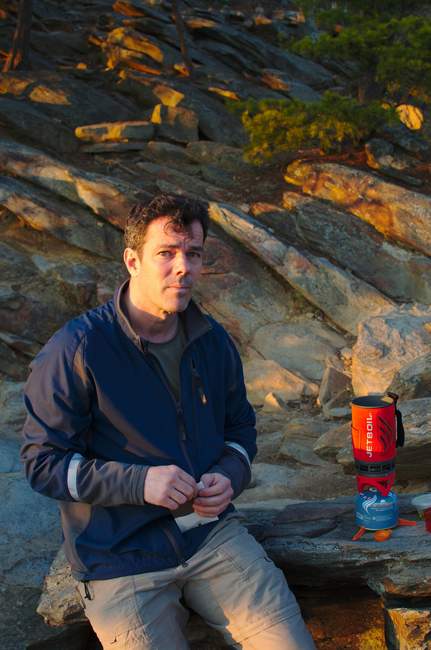 Jerry has his own couscous, and it's almost ready! 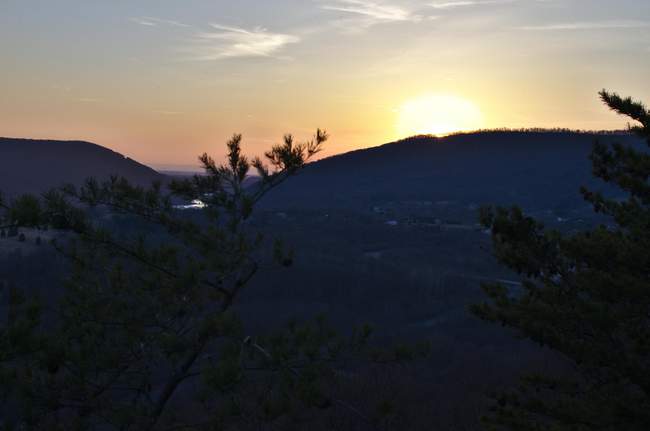 The sun dips just below the mountaintop.

The temperature was dipping into the 40s and it was time to get inside our respective sleeping bags. It took us a while to find our camp again in the dark, but Jerry had a sun-like torch to find the way, and I had my LED headlamp on its highest setting. We found the site after considerable bumbling and grumbling. I hopped into my bag and enjoyed the warmth.

Hours go by, and I’m turning around in my bag as usual. My knees get tired of the lock-out, so I switch to my side for a bit. Unfortunately that makes my ass stick to a side of the hammock that isn’t insulated, so then I get cold. Before long in that spot, I’ll go back to my back. It was this kind of situation that led me into my first deep sleep of the night.

Unfortunately that deep sleep was interrupted with my ass hitting the cold and uncomfortable forest floor. My second mistake of the night had shown itself! I’d picked a tree with very smooth bark, and my slap straps had slowly unraveled with my turning. To make matters worse, I let out a loud yelp once I actually hit the ground. It was so loud that I immediately apologized to Jerry for waking him up (I heard no response). I adjusted the straps and had a normal night thereafter.

Waking up in the morning, we congregated on the rocks for some black coffee. That’s something I haven’t done before, and it was phenomenal. I’m definitely doing that in May! 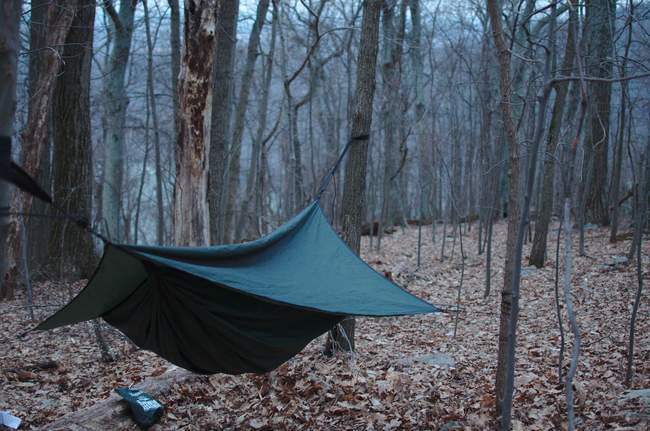 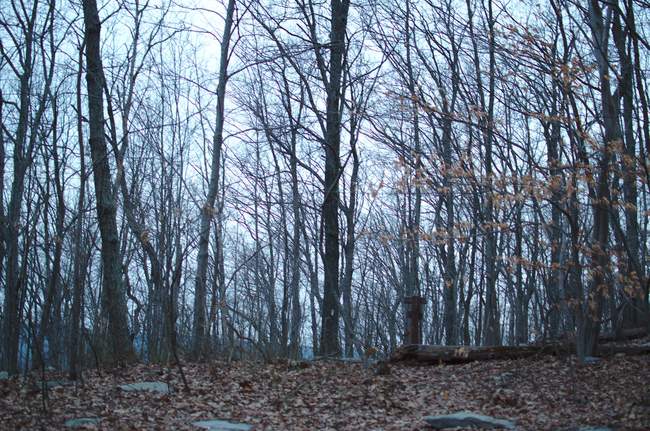 The view from the hammock, about 7am. 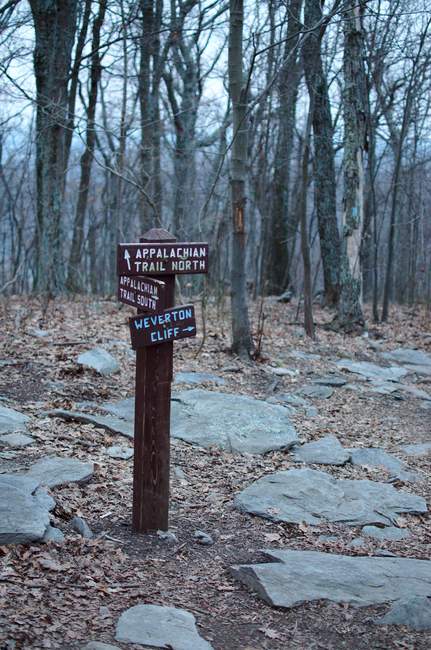 The trail down to the cliffs 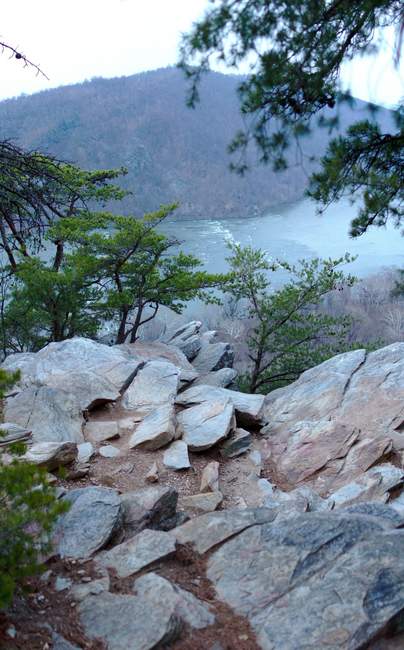 The view as you approach.

It's a little gray, but still gorgeous. 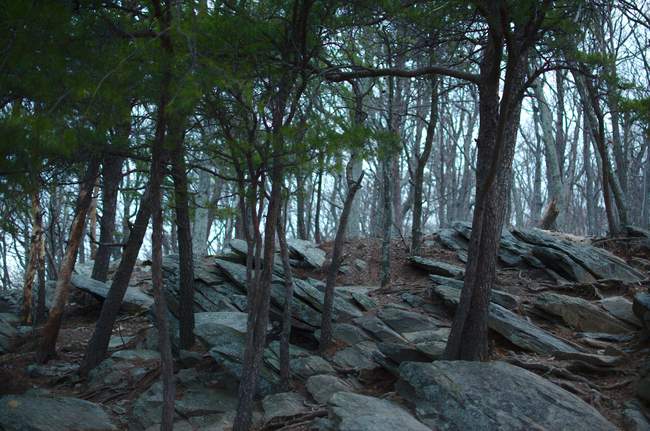 Time to head back...

On the way back to the car we passed again through lower Harper’s Ferry. It was almost barren and bitter cold, making it the complete opposite of the day before. We hopped in the car and high-tailed it to Stoneybrook Farm and Market for some breakfast. It was probably the best egg and provolone sandwich I’ve had in my life, and I gobbled it down in no time. Jerry opted to get us (he bought - thanks Jerry!) a cinnamon roll too, which was also unbelievably good. I made a mental note to stop by there on my next hike in the area. Hopefully I don’t have to wait until next March for another one of those!