Summertime is upon us, and the time was right for Tommy and I to do our annual tune-up hike in preparation for the bigger Memorial Day one. This time around we chose to head up north of Harper’s Ferry, WV to a shelter we’d passed by a few years ago: the Ed Garvey Shelter on the Appalachian Trail. The one-way distance was just a little over 6 miles and the elevation gain moderate. Paired with the perfect weather - mid 60s during the day, upper 40s during the night - the scene was set for a great time.

We started off by dropping the dog off at a friend’s place in Chantilly, then went straight up Rt. 15 to Harper’s Ferry. After fumbling around looking for a parking spot for a few minutes, we lucked out and nabbed a free spot right near the park. We waved goodbye to my Corolla and started across the bridge to Maryland around noon. We trod along the smooth, flat C&O towpath for three miles, noting the tons of turtles out on their respective logs to our left. To our right the Potomac flowed rapidly off the rocks.

We crossed over the railroad and began our ascent, bringing forth the first sweat of the day. Fortunately the breeze was abundant and overall the hike was really pleasant. The rocks underfoot were the only annoyance, forcing us to keep a keen eye downwards instead of on our surroundings. We were also a bit disappointed with the huge amount of noise pollution coming from the semis and Harleys whizzing by on Rt 340 nearby. We shrugged it off with jokes from South Park about Harley owners.

After a little over two miles of hiking up the mountain we came to our first side trail to Weverton Cliff. We were impressed with the site, which offers commanding views of the entire area. We hung out there for over an hour, taking pictures and chatting with some folks up there for the day. As always for Tommy and I, the hike wouldn’t have been complete without running into a Boy Scout troop somewhere along the line. We found ours hanging out at the cliff with all sorts of heavy equipment. 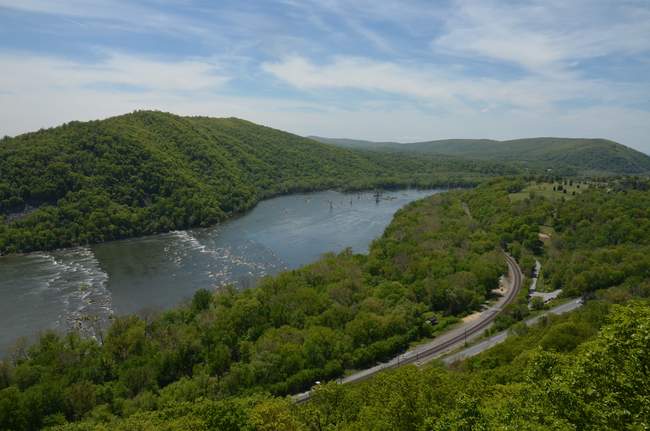 Weverton during the afternoon, where we stopped for lunch 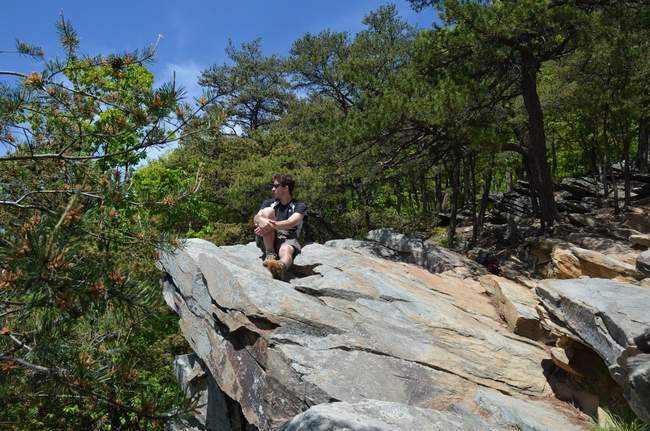 Tommy taking in the view

Having downed a protein bar for lunch, we made our way further north to the Ed Garvey Shelter. It was just as we remembered it - impressive. It sports two stories and an upper “apartment” area, both of which are pretty rare as AT shelters go. Already there were two guys out for the weekend with their dog Oreo, who had a large bell attached to his collar. We decided to take a breather by bundling up in our sleeping bags for a snooze in the lower area. When we awoke the guys and their dog were gone, and we decided to double back to Weverton Cliff to spend the night. 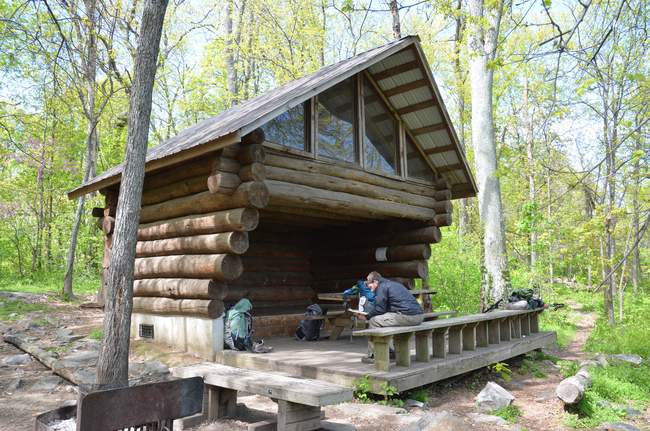 The Ed Garvey Shelter on the AT 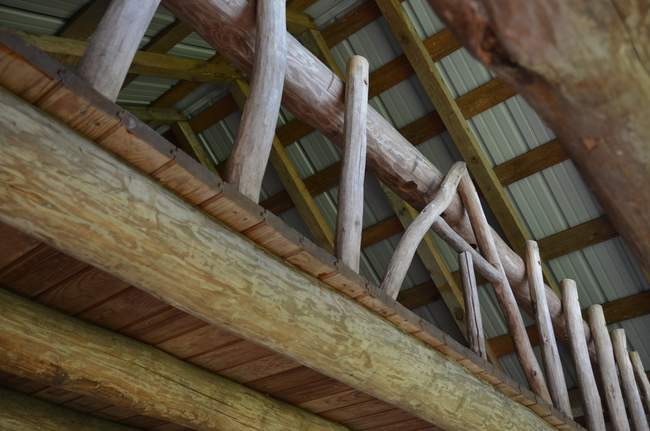 Clever craftmanship - working in an AT sign on the shelter 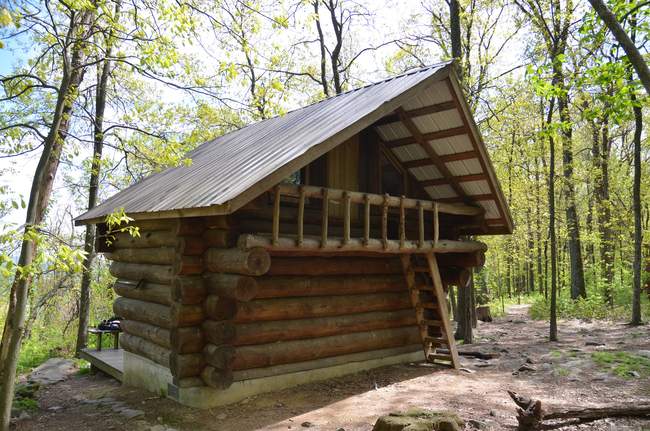 Ed Garvey Shelter from the other side 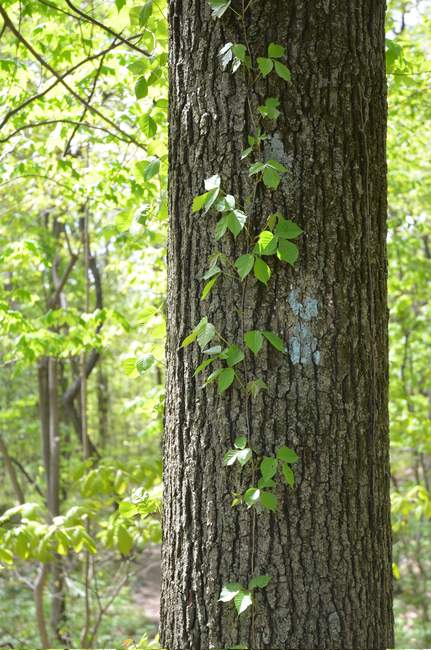 This way to the spring...only a half mile downhill :D 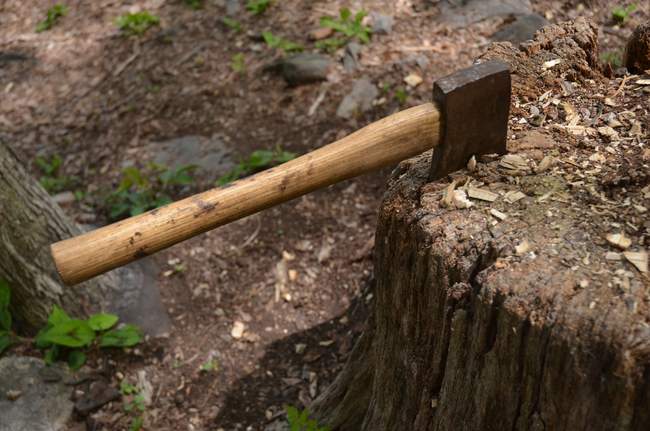 Not many shelters have such a good setup

We arrived at Weverton at about 6:30, where we promptly cooked our couscous with olive oil. This was a huge improvement over previous attempts without the oil, so that’s something I’ll have to continue in the future - it was delicious. With each of us full, we waited for the sunset and grabbed our sleeping bags from our camp about 100 feet behind us. 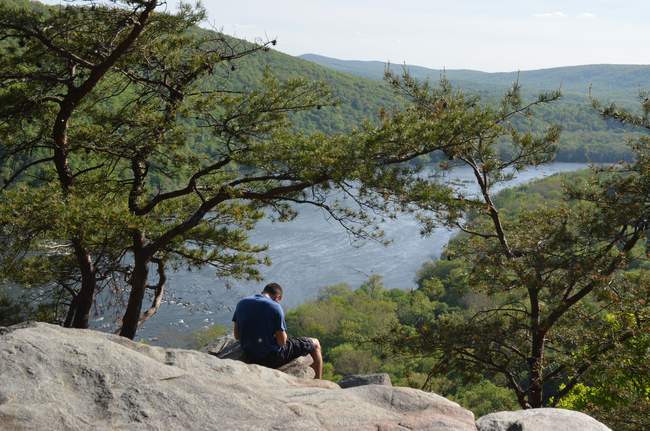 Back at Weverton for the night 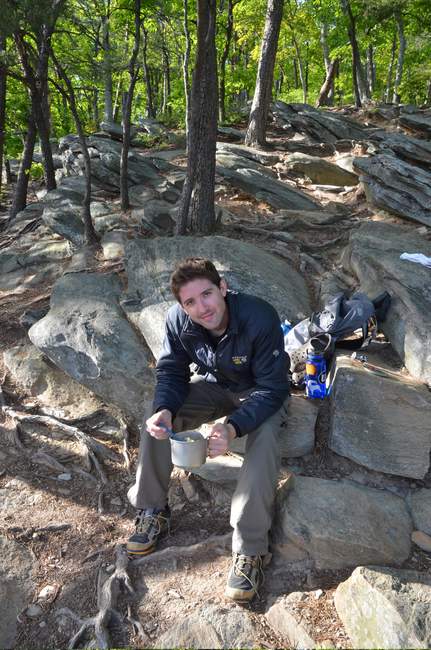 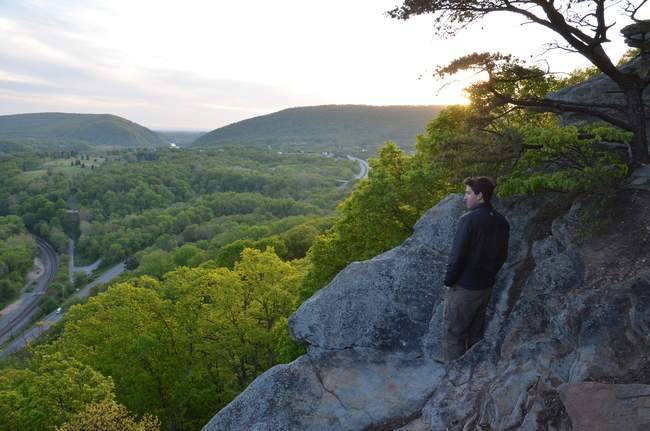 Waiting for the sun to go down

The sun dipped below the horizon slowly, and we watched people come and go to see the sight. I grabbed as many panoramas as I could of the scene, hoping to catch a good one. Soon the time came for us both to head into our hammocks for some sleep. We each had fitful nights for different reasons. Tommy was cold because he forgot his sleeping pad, and I was shifting from my left side to my right because of my allergies bothering my nose. Par for the course in sleeping in the woods, I suppose. I think both of us tallied about 6 hours of sleep, so not too bad. 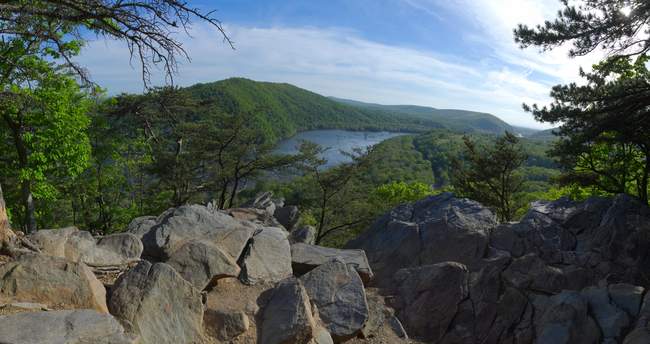 Stepping back a bit

We woke at about seven in the morning and went straight down the mountain with little fanfare. The going was quick and the breeze was stiff, but the sights kept us going. We also discussed plans of doing a four-state challenge (41 miles from the PA line to the VA line in one day) instead our normal Memorial Day hike, so we talked around all of the issues we could think of. By the time we reached the bottom we had it all figured out. We hopped back in the car and back down Rt 9 towards home, stopping at Stonybrook Farm along the way for some coffee. We arrived back at my place just before noon for a glorious showers, each having had a good time.

Here are the rest of the pictures I took during the trip if you’re interested.