Day four was indeed a big day, as anticipated. We stocked up on some complimentary breakfast at the hotel and were out the door around 8 in the morning, heading North to Point Reyes National Seashore. I tried not to look up at the sky too much – it was exceedingly foggy and there was little to no visibility beyond what was just in front of us. I convinced myself that it would clear up in due time.

We arrived at the visitor’s center before it opened, so we wandered around the immediate area a bit. They had a piece of art in one of their fields that seemed to be a reminder to recycle or otherwise watch what you left in the park. I thought it was pretty effective. 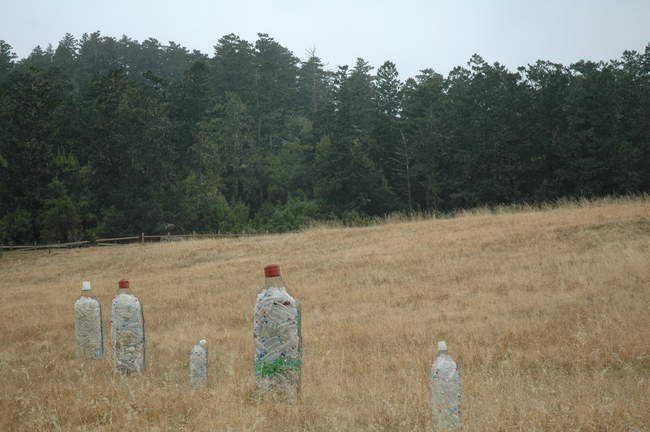 A reminder to leave only footprints

The visitor’s center opened, we got our park map, and we were off. The fog still hadn’t cleared up and there were very few other visitors in the area, which made us feel very isolated. 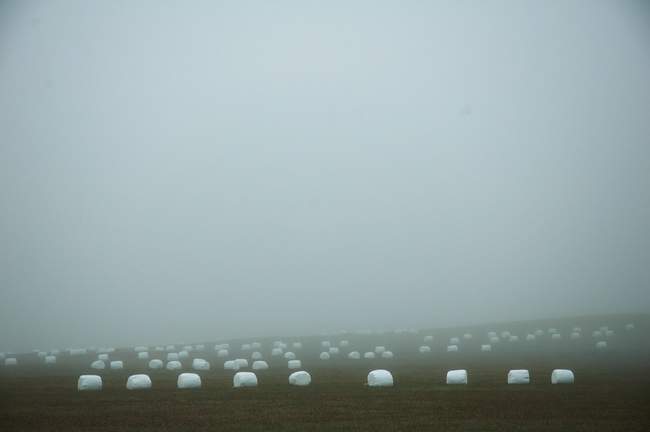 We parked at a beach overlook, but couldn’t see anything; the fog was all-encompassing. We read our books for a while and even took a nap in the car for about a half an hour. When we woke up the weather hadn’t broke, so we drove into the closest town (Point Reyes Station) to burn some time.

The small town was friendly and walkable, with lots of things to see. We ambled around for a while, taking things in and sipping on some local coffee. 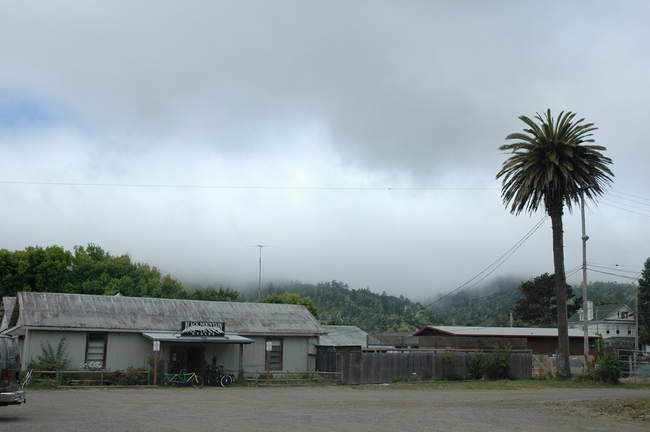 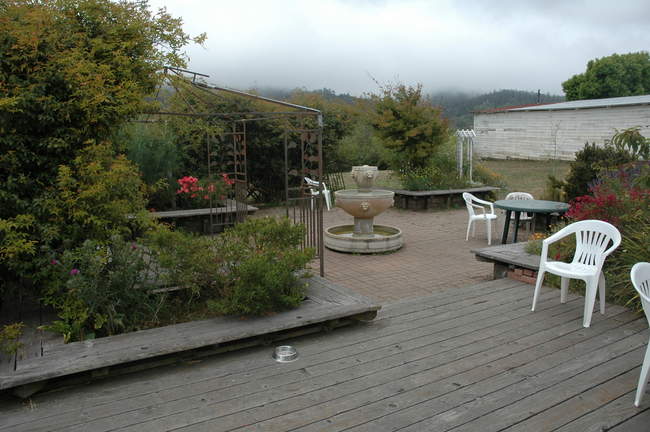 A patio outside of Point Reyes Station 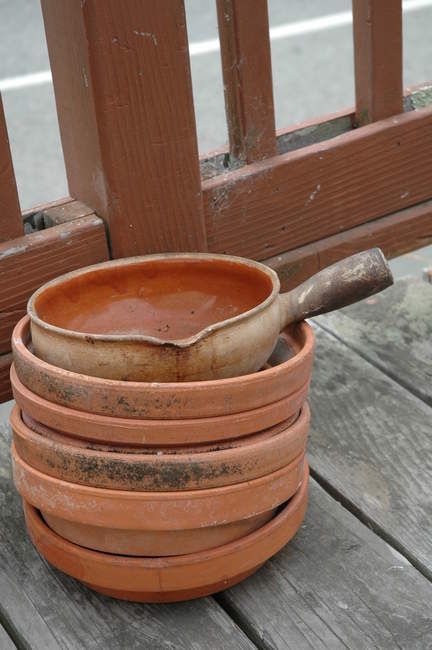 Pottery sits idle on the deck 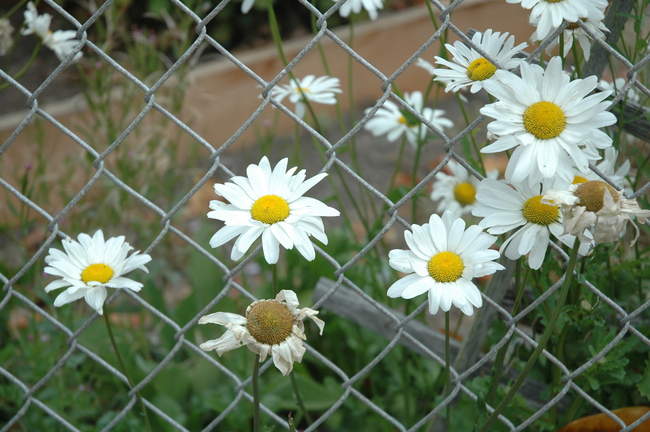 Despite the harsh weather and persistent fog, these guys seem to thrive! 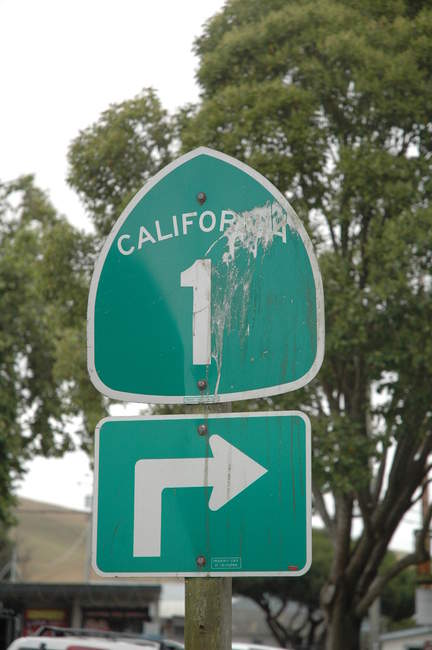 Route 1, my friend the entire trip

On the way to the beaches I saw something through the trees and pulled over. Behind a tiny convenience store there was a boat beached in the sand and rotting away. It was a phenomenal sight that got even better the closer we approached. 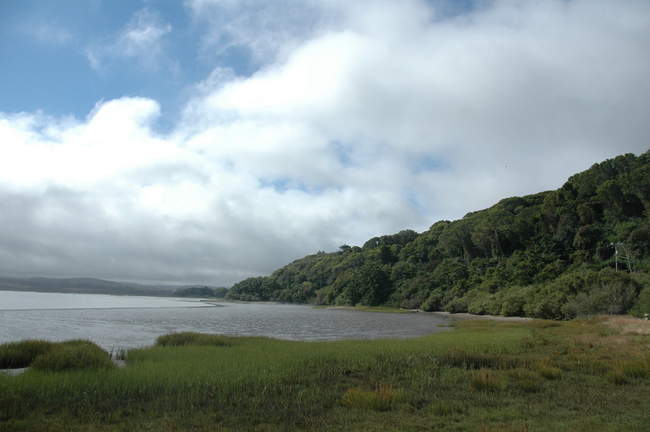 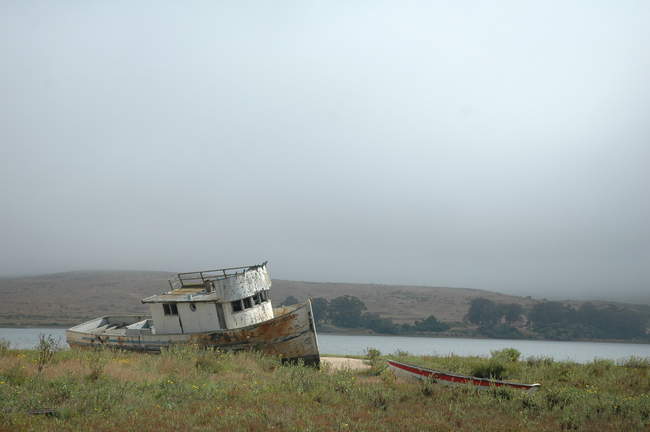 The boat embedded in the surf at Inverness 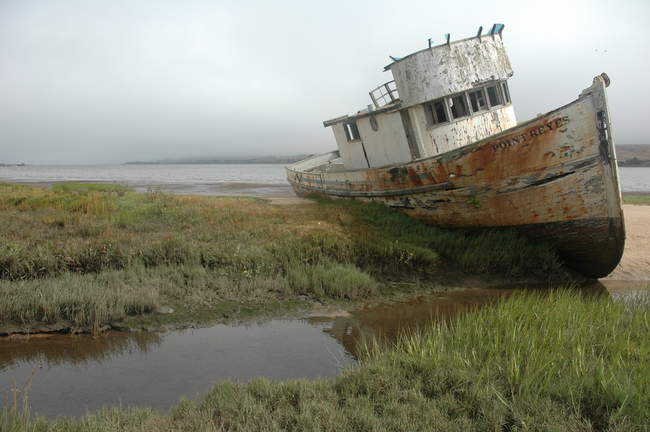 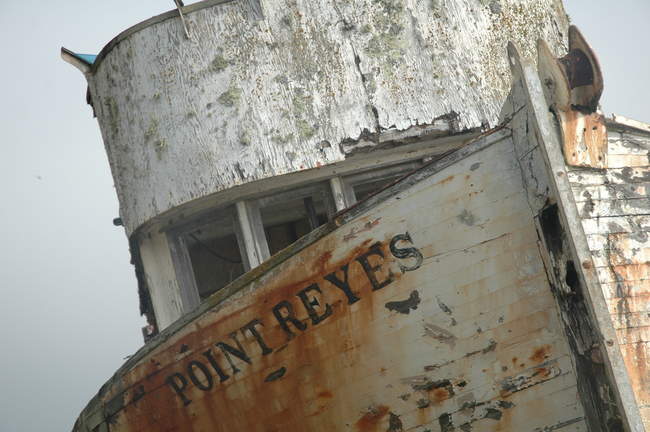 A closeup of the deterioration 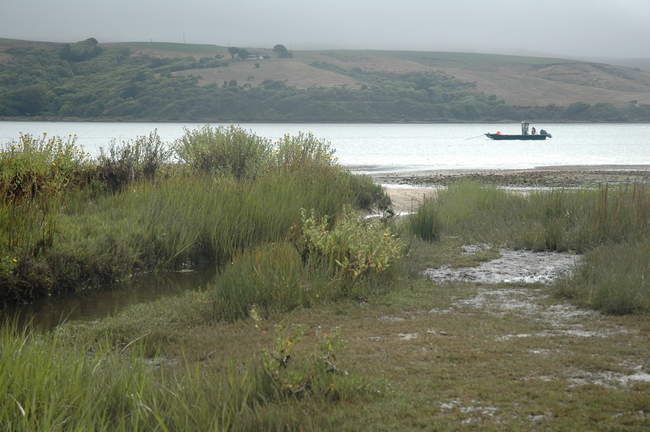 Fishing over the San Andreas Fault

Of course I took a panorama of the scene. What is especially interesting in this one is how you can see the the fog and misty weather sweeping from the left to the right.

In the town we went into a photography shop so I could get some tips and/or hints on where to shoot during the day. The lady behind the counter was kind enough to give me a good one. She told me to go to McClure’s Beach and head to the left, through a small crevice to a somewhat hidden cove where I could find some beautiful rock formations. I bookmarked the tip in my head.

By midafternoon the weather was clearing up, so we went back out into the park towards the lighthouse. Getting out of the car we were immediately greeted with breathtaking cliffs over crashing water. 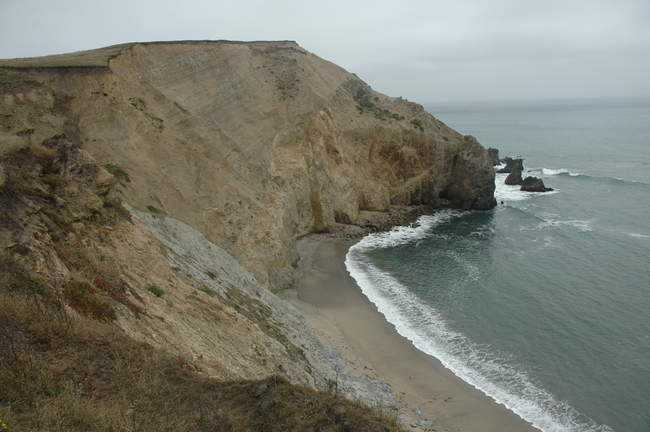 On the way to the lighthouse 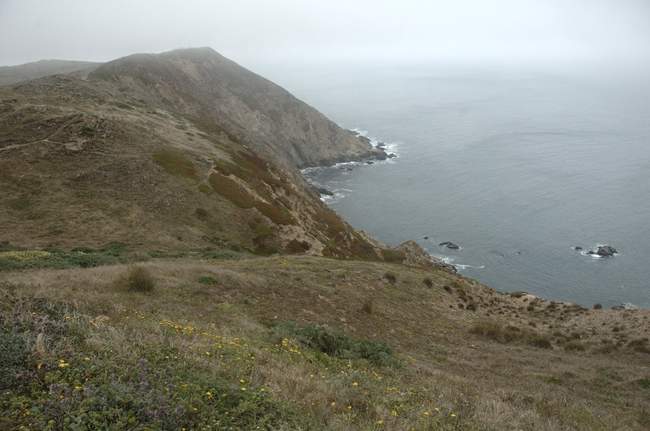 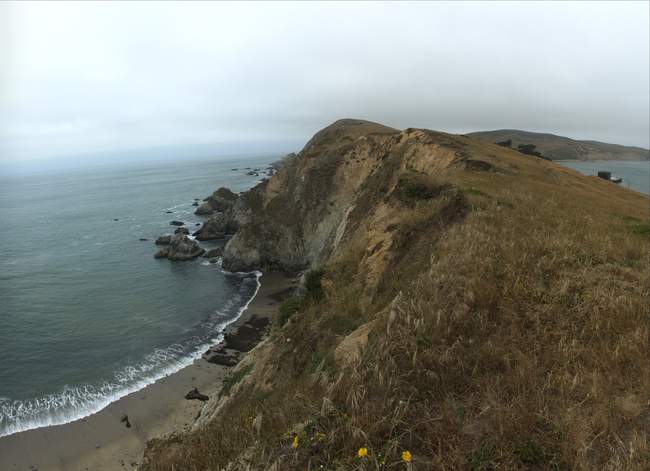 Looking back the other way

After a little bit of hiking we came to a point in the penninsula where the lighthouse was located. The wind picked up considerably and the mist was strong. Cypress trees were bent from the wind, forming a canopy. 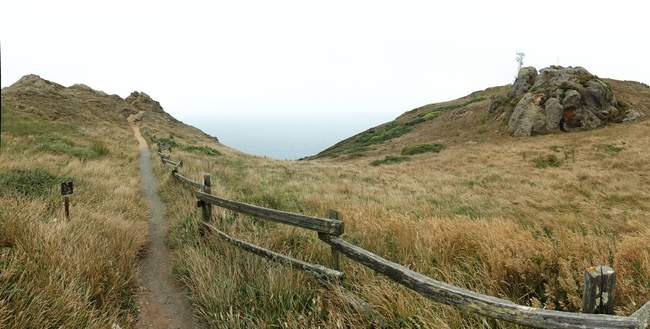 Heading towards the lighthouse 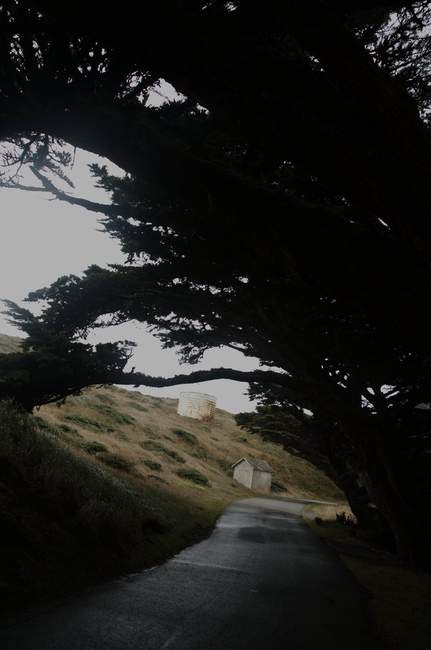 Cypress trees bent from the wind

The lighthouse sat at the bottom of a long decline and out towards the Pacific. Unfortunately it was closed when we visited, but we were able to take in the other sights in the vicinity. 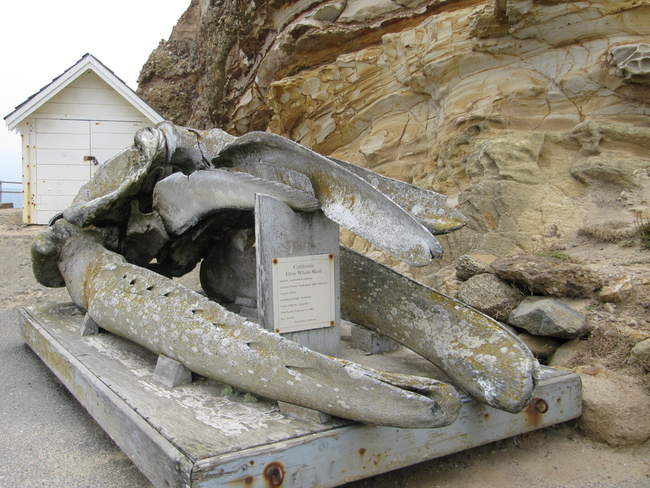 We warmed up in the car after leaving the lighthouse area and went towards the other point on the lower penninsula. There we hiked about a mile and a half out to Chimney Rock. We were impressed yet again at the sheer magnitude of the rocks and the abundance of unique things to see. 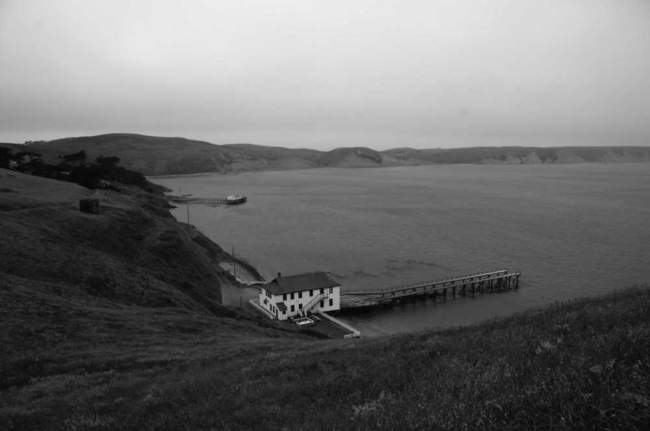 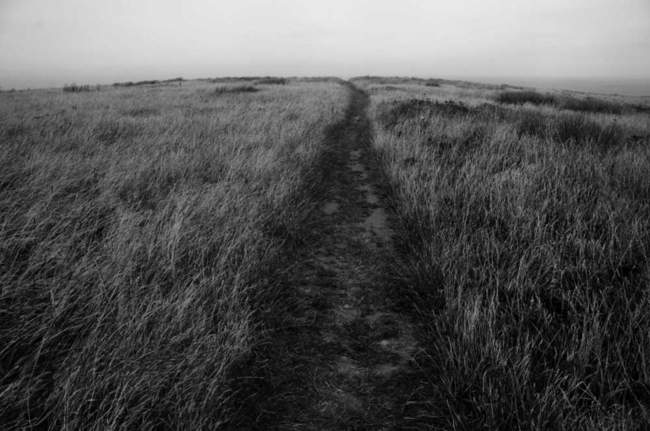 We reached Chimney Rock at about 3 PM. 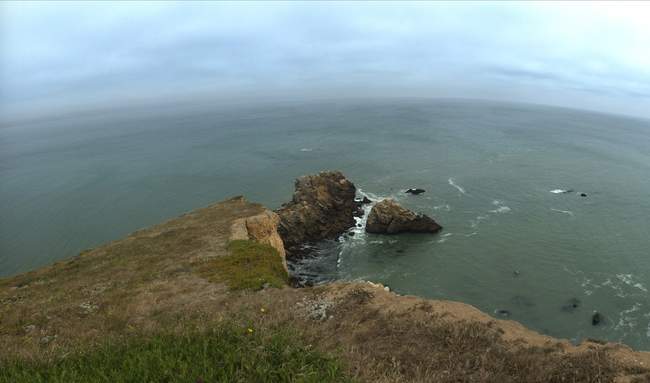 After seeing Chimney Rock we went to the northern end of the penninsula to check out the tip we’d received earlier from the local photography shop. That lady didn’t disappoint! McClure’s beach was fantastic…and dead empty! We had the beach to ourselves and could explore all the nooks and crannies of the coastline. I found the gap in the rocks and my jaw dropped when I saw what was beyond it. 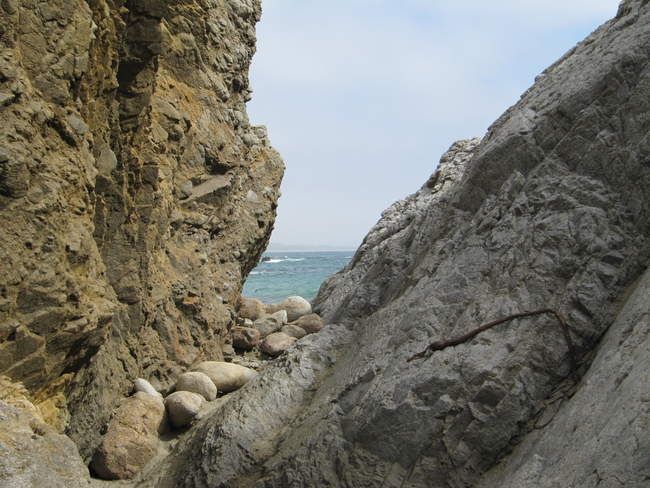 The opening on McClure's beach to get to the Monolith 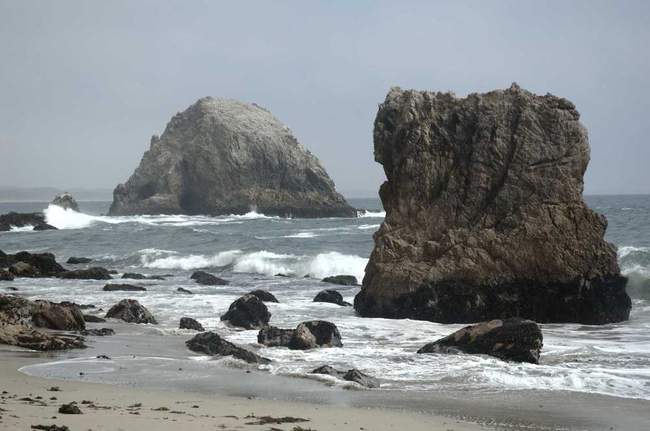 The Monolith, seen as we approach it 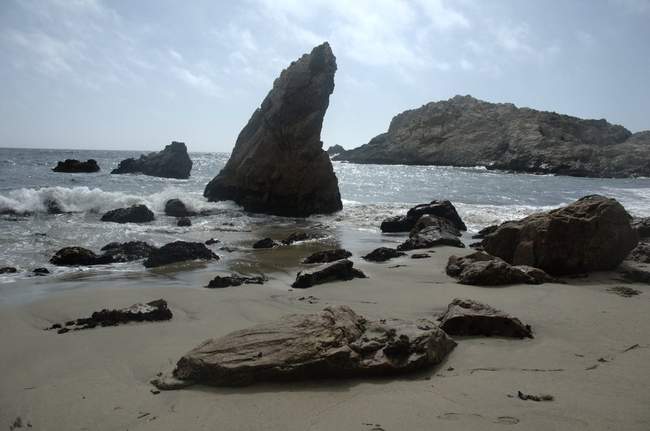 Another view of the Monolith rock from another direction 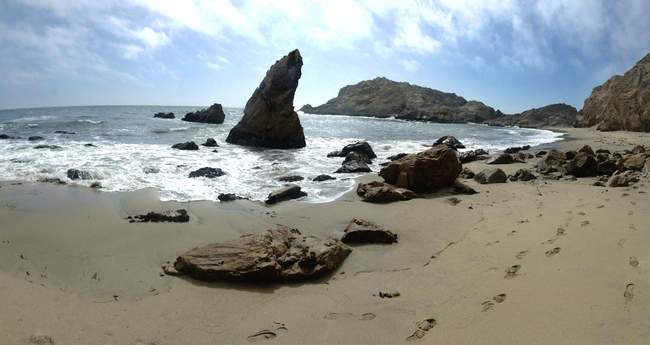 A sweeping view of the Monolith 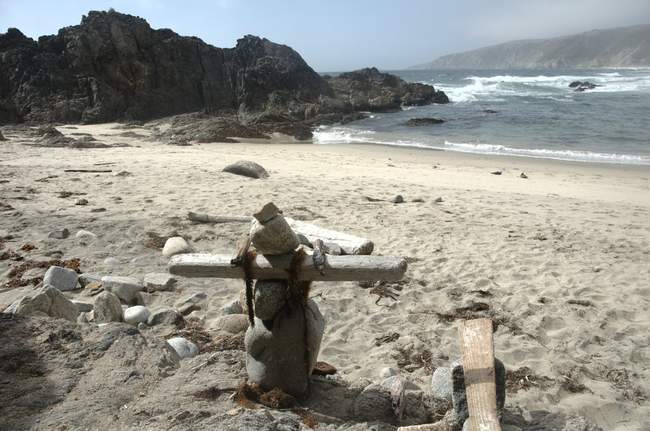 This little guy is enjoying the view

On the way back home we stopped in Sausalito for dinner. Little did we know how good of a view of the coastline it has! We ate at a place situated on a dock in the bay with an unobstructed view of the San Francisco skyline. The good food paired with the sunset made for an awesome time. 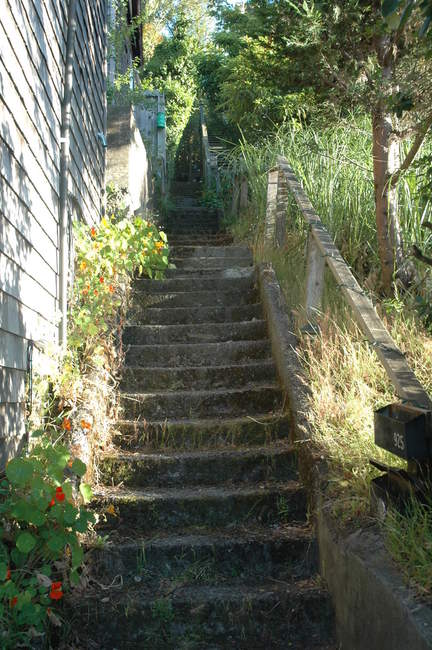 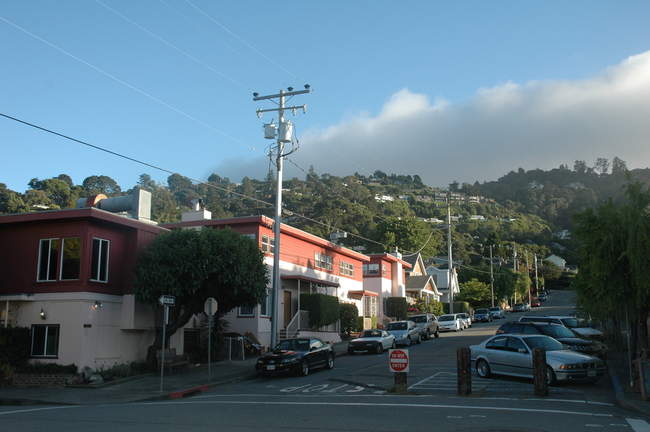 The sun grazes over Sausalito 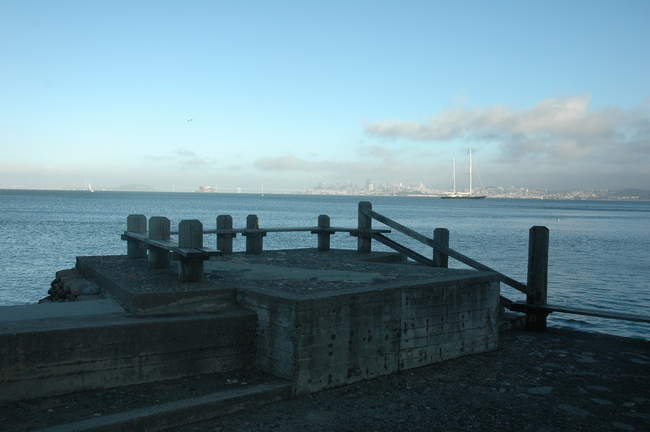 From the very corner of downtown Sausalito 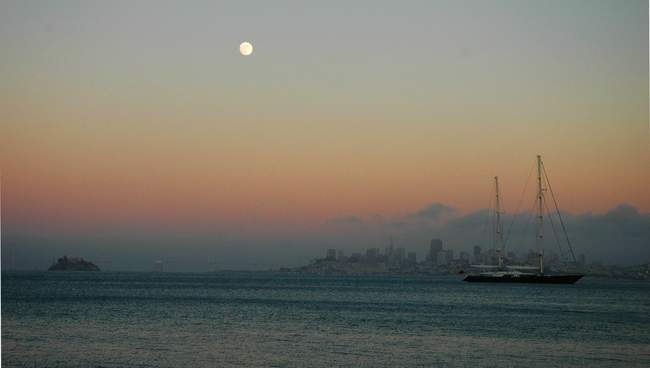 A beautiful skyline view, taken from a small dock

Phew, what a day! We got back to our hotel that night full and sore from a day well spent.