Taking advantage of the time differences between Virginia and California, Kristin and I were able to get out of the hotel very early on Monday morning. Our goal was loosely to drive down to Monterey via the fabled Pacific Coast Highway (Highway 1). After stumbling a bit on the directions and stopping for gas and coffee we were on our way.

We didn’t hit much resistance in the form of traffic, as we were apparently going in the reverse direction compared with the commuters. We were soon out of the city and into the fog of the hills. I had hoped for some clear weather in order to see the ocean clearly, but that wasn’t in the cards. The fog was persistent and all-encompassing, but nevertheless beautiful. 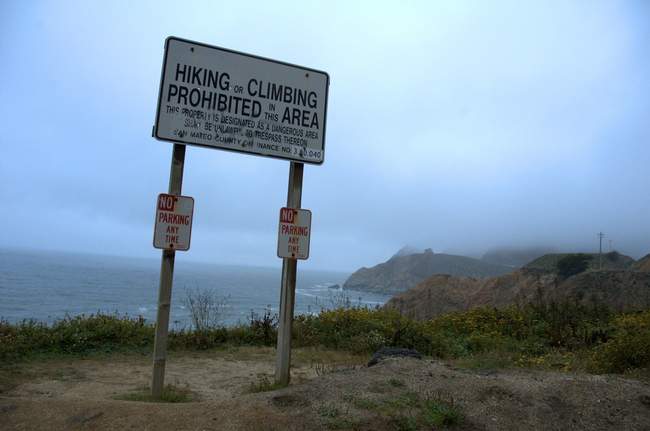 I am sure that this particular sign is ignored thoroughly

I found it well suited for some moody black and white photography; the bluffs and the fog mixed together to create a gloomy, lonely feeling. 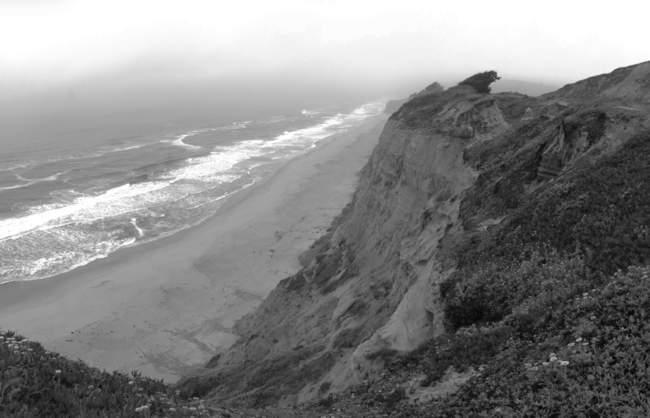 We pulled over at one point to take pictures of the succulents, which were very green when compared to the gray all around them. 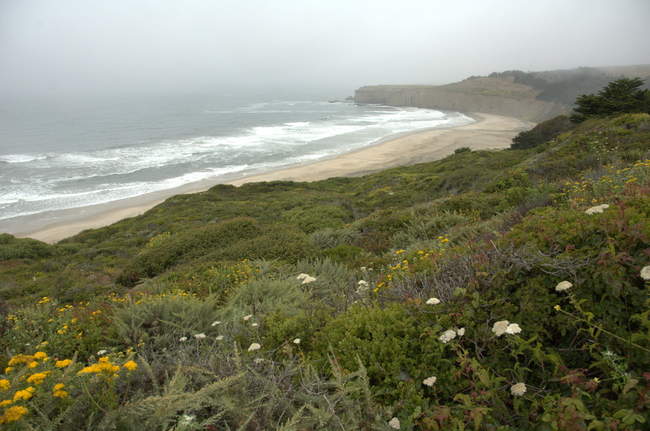 The green holds on for dear life against the strong wind 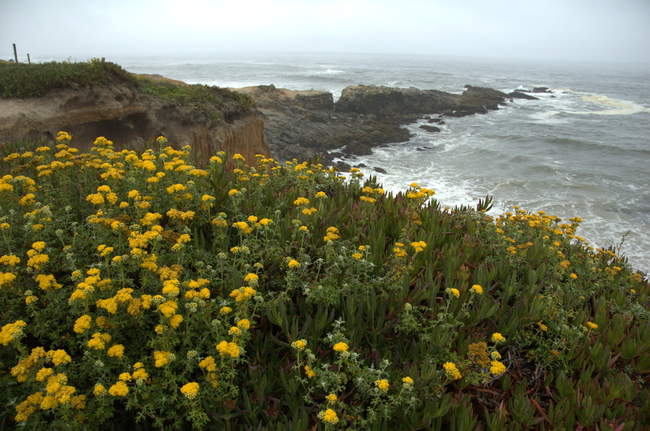 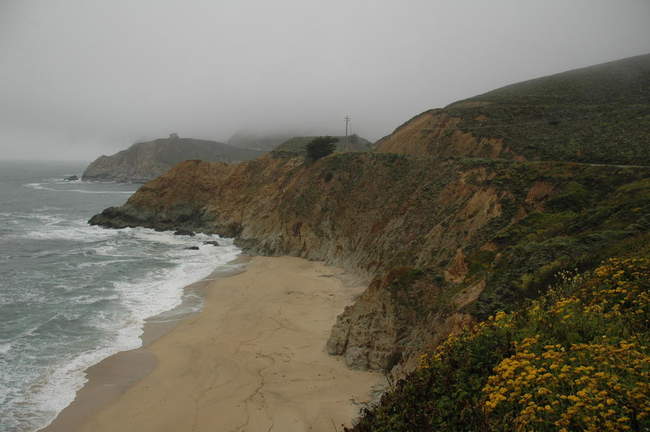 One shot in particular I had to run down a very narrow pathway to avoid being hit by cars. One smug fellow in a Porsche thought it would be funny to buzz his car as close to me as possible, despite him being in the opposite lane. I was not enthused, but was happy to come away with a memory of the scenery. 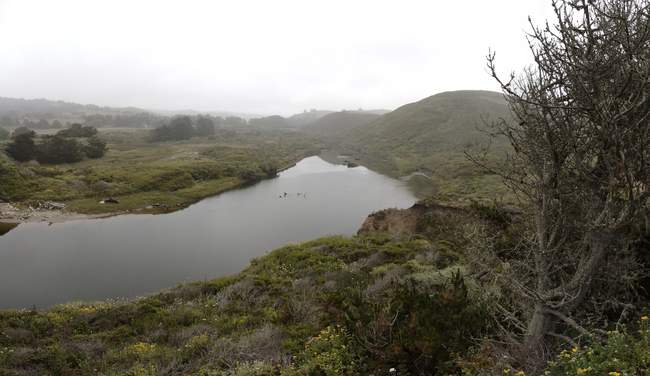 I jogged across a narrow walkway on a bridge to get this one. I wanted to remember the view!

Looking over the edge we saw a pathway that led to a beautiful beach. Upon the beach someone had built a tower out of rocks about five feet tall. I tried to add smaller rocks to it but didn’t succeed.

Another view of the rock stack from afar 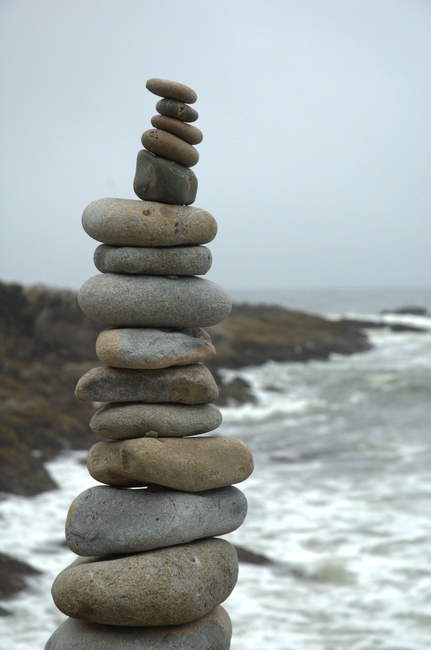 The top of the stack of rocks 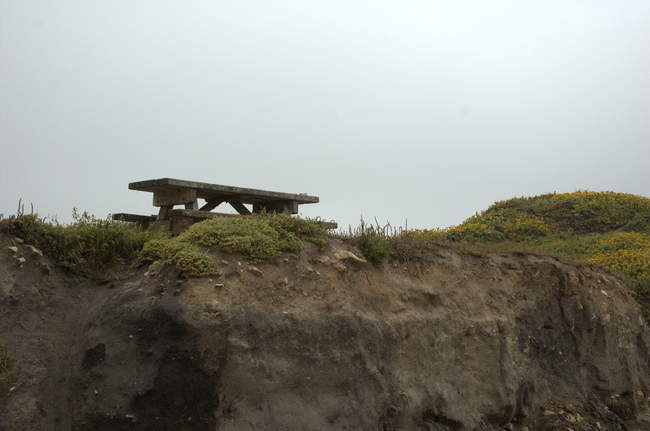 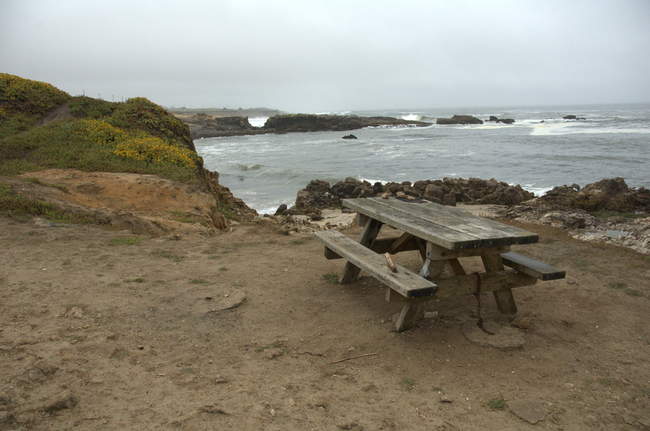 Up on top of the bluff looking out

Heading further south we came upon Pigeon Point Lighthouse (http://en.wikipedia.org/wiki/Pigeon_Point_Lighthouse). Built in 1871, it is still the tallest lighthouse on the West Coast. Cool! 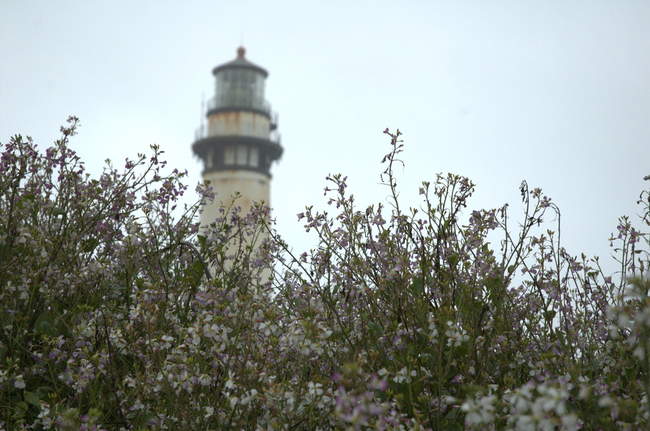 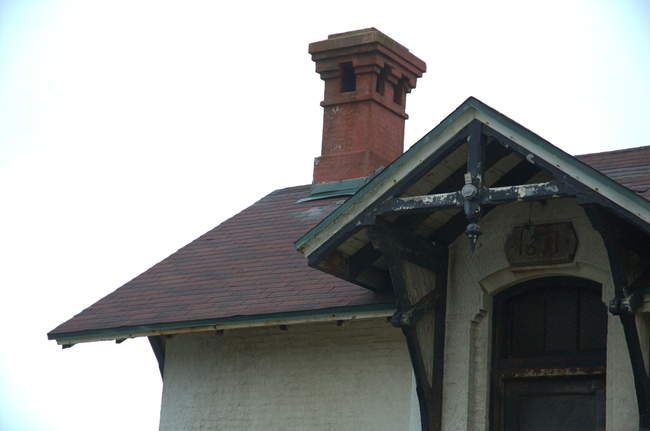 We spent a good amount of time exploring all of the features around the immediate area. On fascinating bit was the nook directly to the south of the lighthouse itself – the waves crashed in and sprayed up in a great show of power. 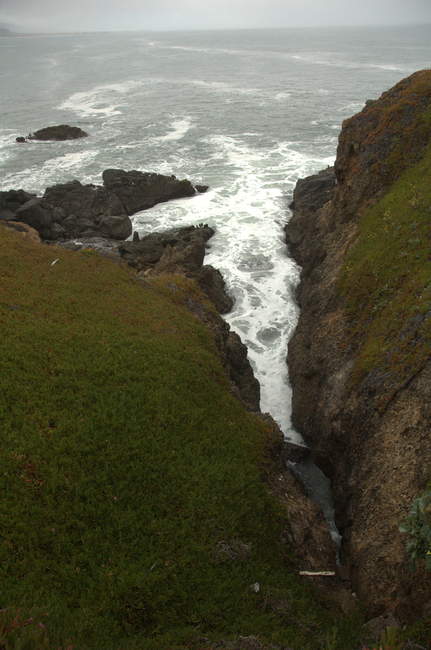 Looking down around the lighthouse

After staring in amazement for about a half hour we continued down the highway towards Santa Cruz, where we wanted to grab some lunch. Halfway there the fog cleared and we were left with a brilliantly clear sky. We pulled off a Greyhound Rock to see what sights it had to offer. We were greeted with a great view of the ocean from the parking lot. 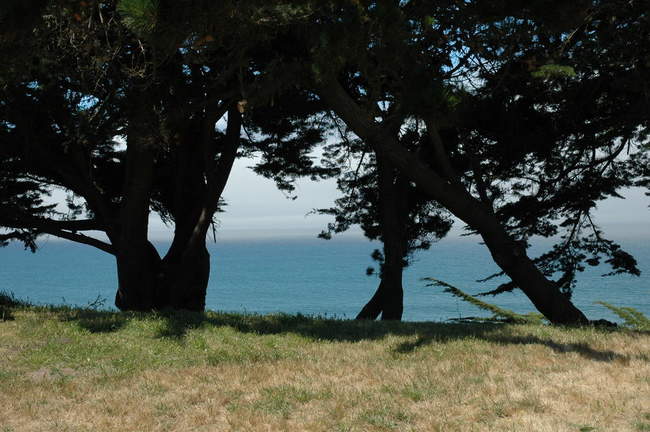 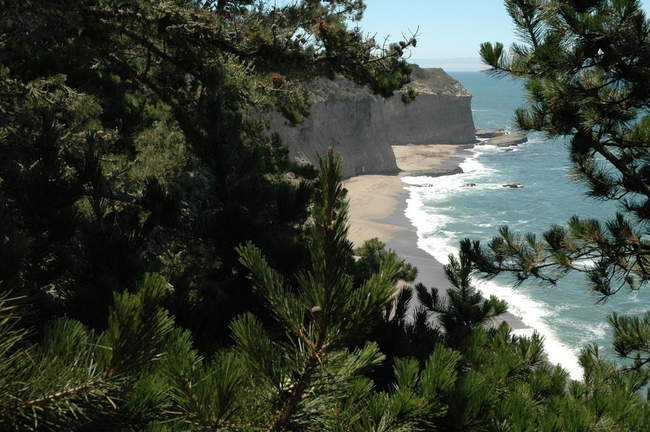 We are starting to see something awesome

Heading down a steep trail the view started to present itself. 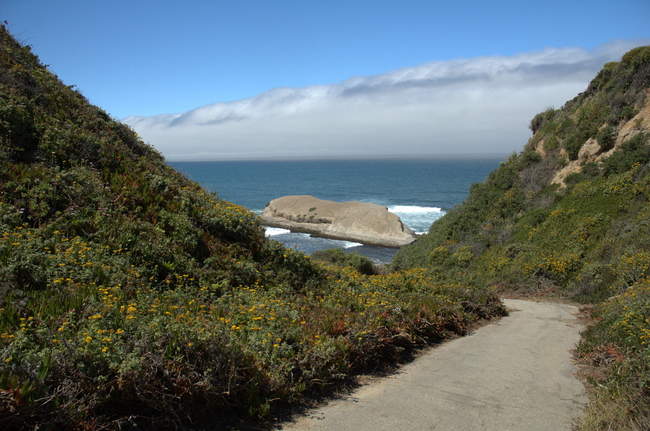 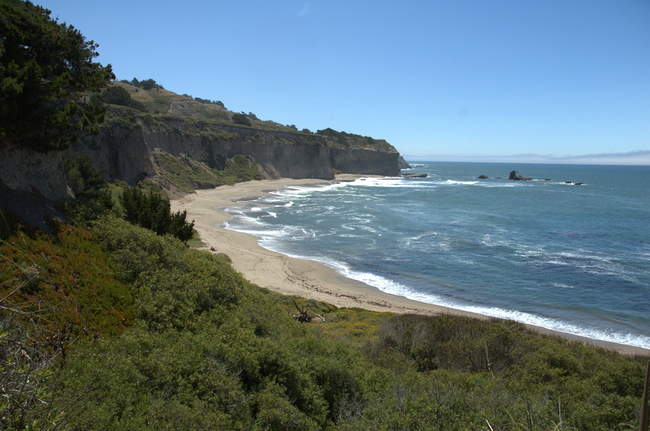 The view from Greyhound Rock

Only when we were fully down were we able to take in the full, breathtaking view. 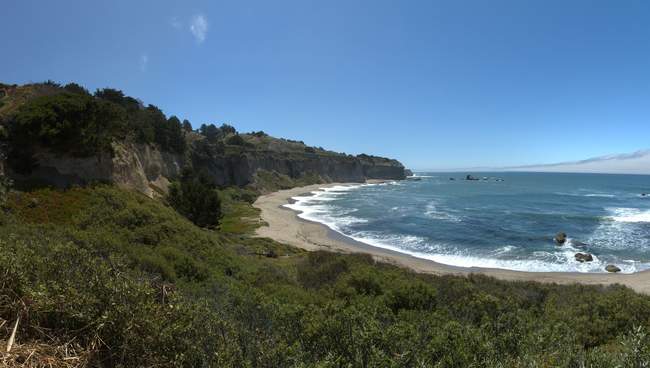 Another view of Greyhound Rock beach

We hung around the beach for a while, enjoying the relative warmth of the sun. We also spent some time watching the three fishermen who had set up camp nearby. 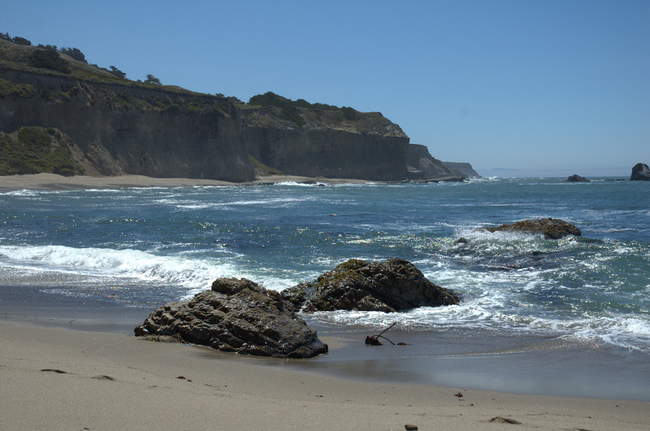 On the beach at Greyhound Rock 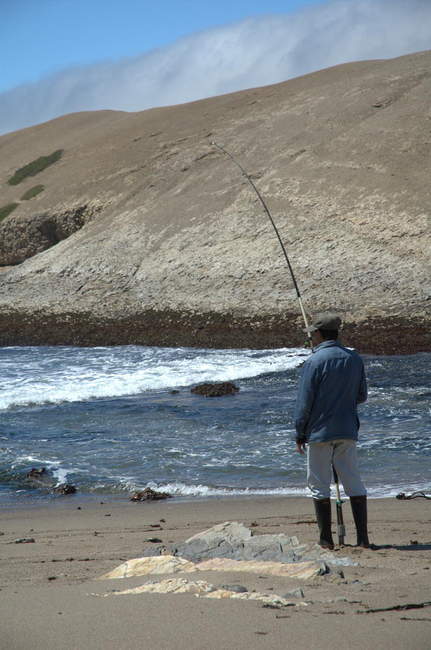 A fisherman on the beach 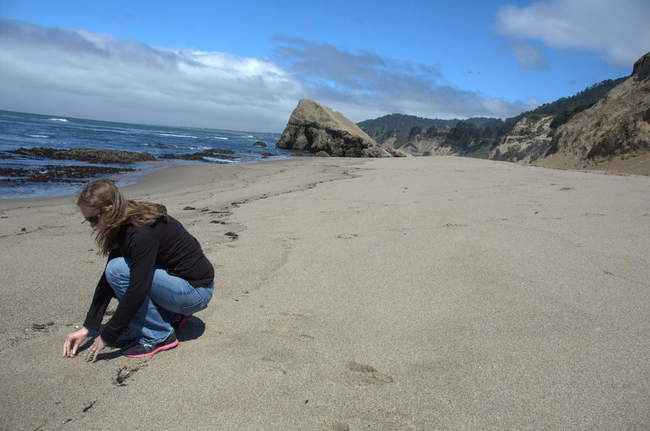 Kristin writes in the sand at Greyhound Rock 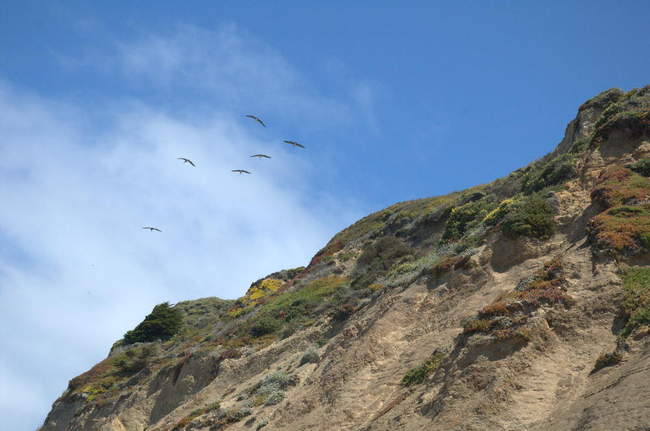 Birds are unaware of the horrible fog just north, it seems.

Continuing on to Santa Cruz, we found ourselves suddenly warm. From the cold of the low 60s in San Francisco and into the fog, Santa Cruz was a relatively balmy 75 and sunny. We parked easily (it was a work day after all) and walked down the wharf, where we saw some wild sea lions enjoying the weather. 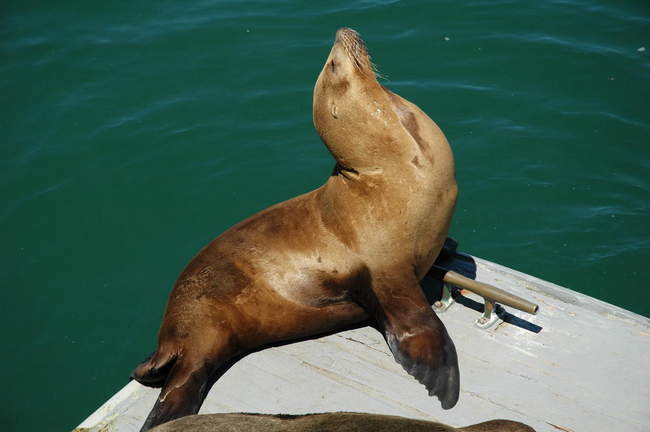 Sealions were basking in the sun off the wharf 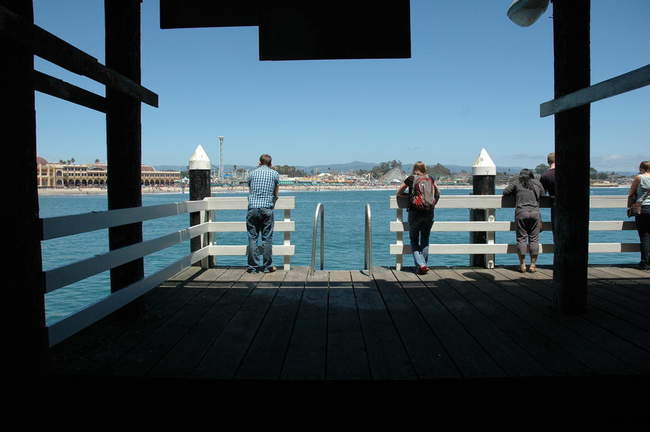 On the floating platform, looking down at the seals below 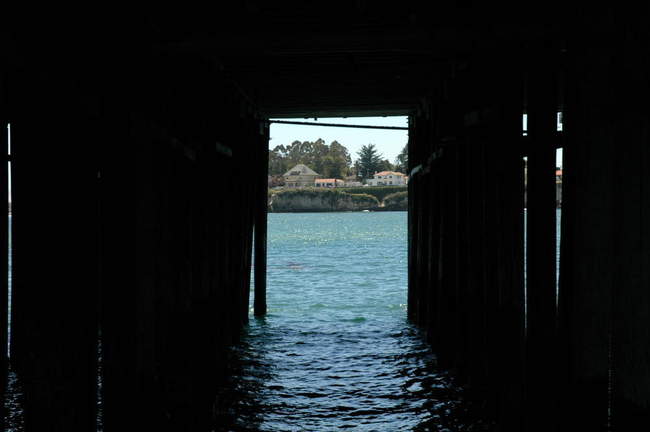 A view to luxury 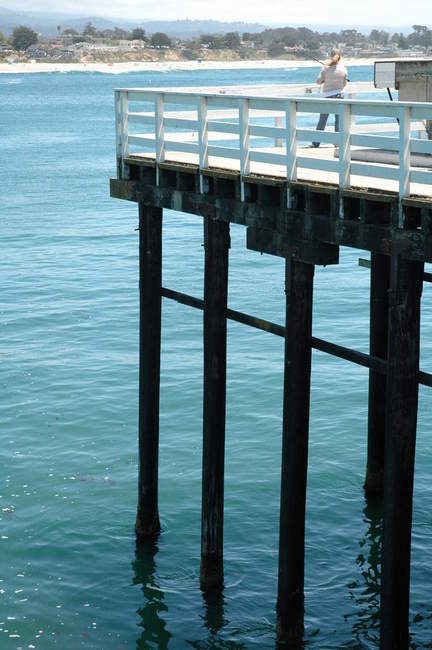 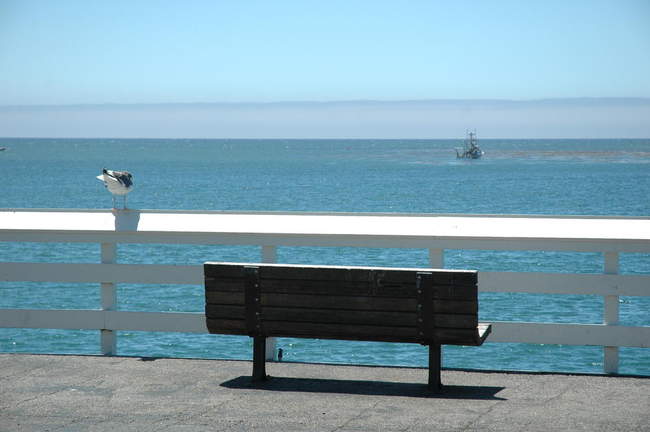 A seagull looks at the fishing boat just offshore

We walked to the end of the wharf and ate at an upstairs Mexican place. Enjoying the view with delicious food and micro-brewed beer was pure joy. 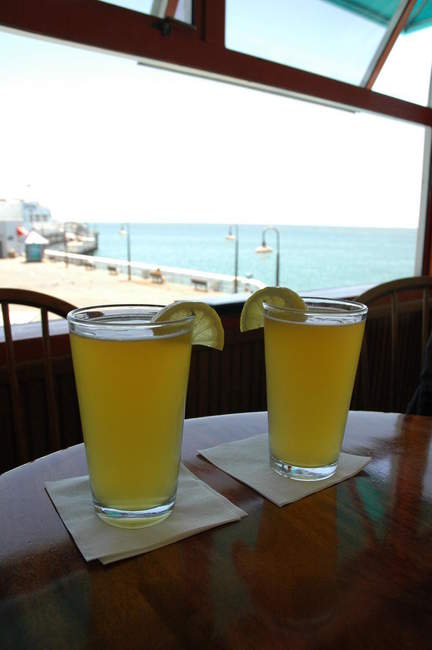 After eating we meandered a little while around the town before heading back to the car, on our way to Monterey and its well known aquarium. 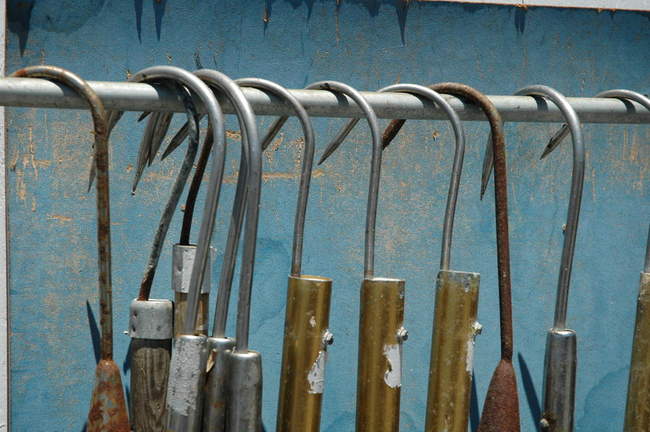 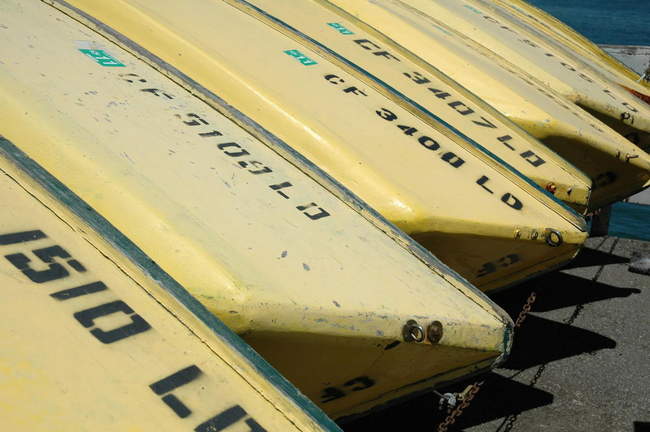 Boats up for rent on the wharf