With Kristin and Layla visiting relatives I had the rare opportunity of exploring DC on my own. After scarfing down a quick breakfast and walking the dog, I hit the road and arrived in the heart of DC at about 10 AM. Fortunately for me the day came with a cold breeze, keeping away many of the tourists that usually clog the mall at this time of year; the metro had ample seating, the mall proper wasn’t very crowded, and I had decent cloud cover for some good photos.

I started off at the Smithsonian Metro stop. I broke straight for the Hirshorn as the light was coming through the top (it’s a circle), which made for some great angular light shots. 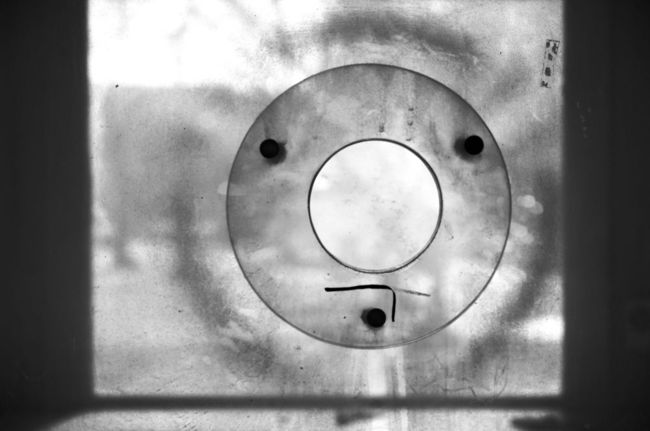 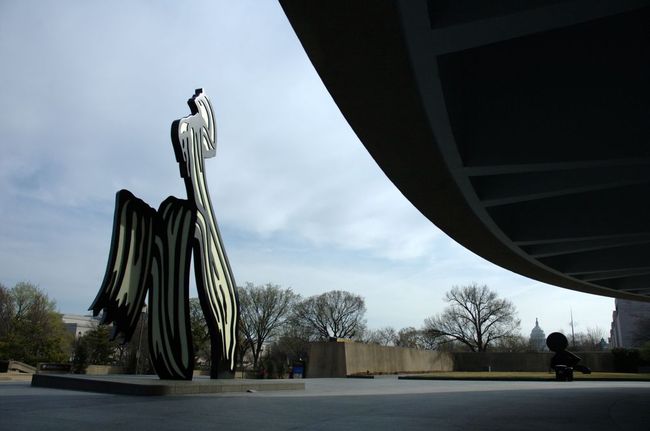 Sculptures in front of the Hirshorn (US Capitol in the distance)

The fountain right in the middle of the ‘O’ wasn’t running at the time I stopped by. I hadn’t seen it like that before, and I was fascinated by the amount of detail normally hidden beneath the flowing water. 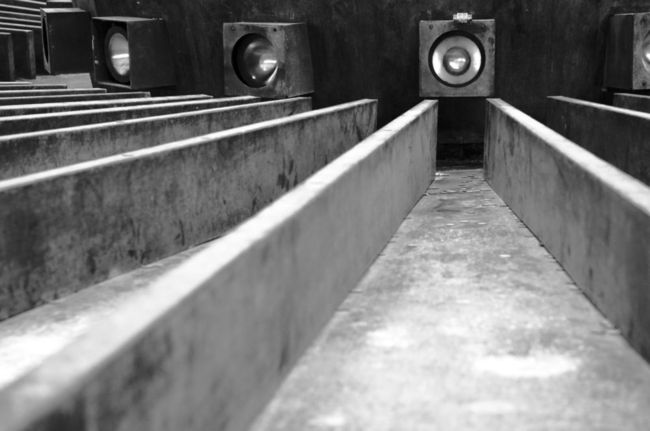 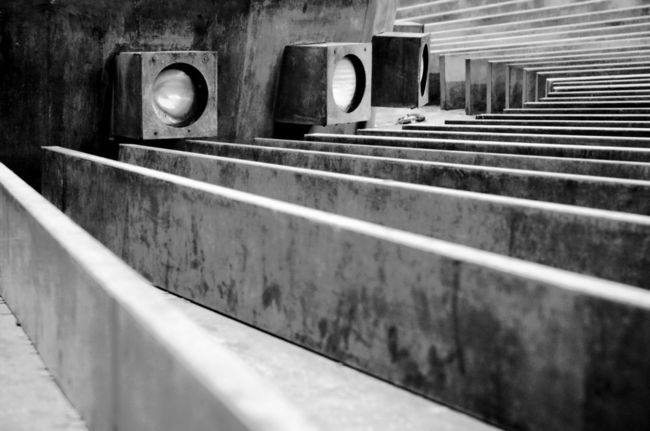 Although I had some cloud cover, at times the sky was just a haze. In this photo you can see just that - it appears as though the sky blots out all the detail in the building below like a spilled whiteout container. 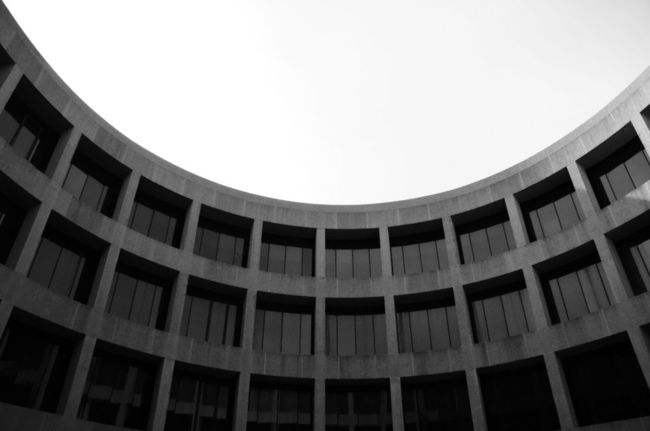 White out sky from the middle of the Hirshorn

I stayed inside the ‘O’ for a while until the light started to play off of the sides in angles more to my liking. I’ve always liked the design of the building anyway, so I had no problem soaking it in for a while. Also, I was somewhat protected from the stiff breeze! 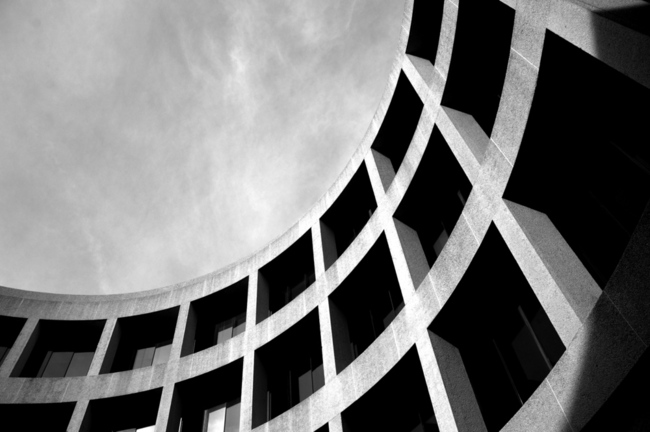 The curve of the right side of the Hirshorn Museum

Surrounding the ‘O’ are a bunch of outdoor sculptures. They add to the overall ambiance of creativity. 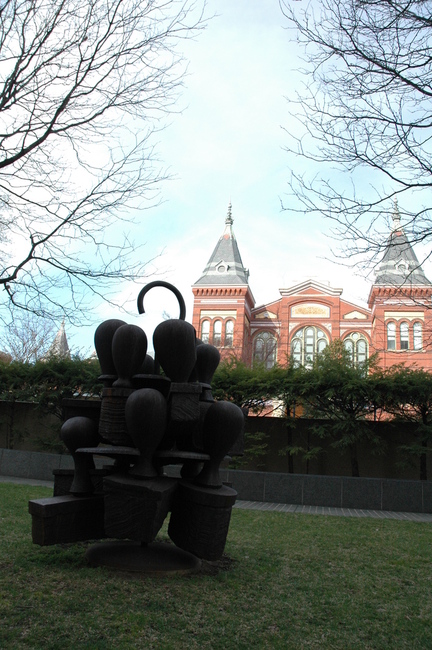 This one in particular reminds me of the movie “Beetlejuice” for some reason. Although you can’t see it here, the people in this sculpture don’t have normal human legs, but rather something like egg pods on which to slither around. Creepy. 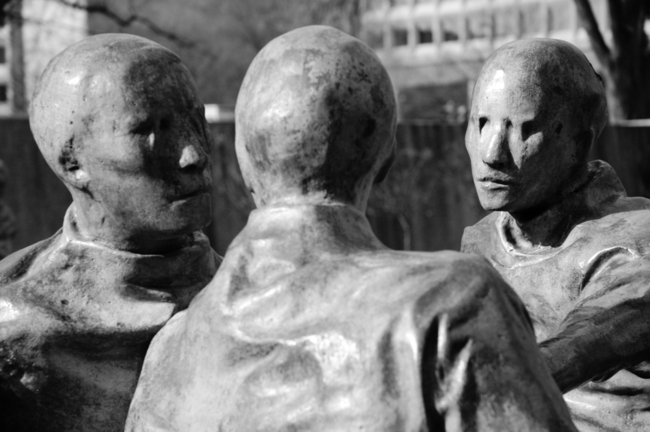 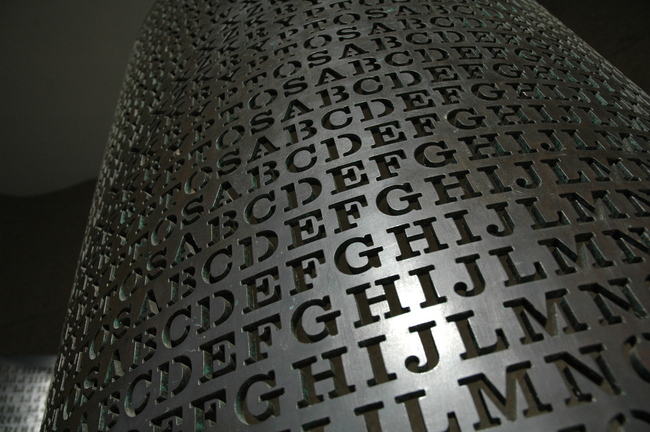 Random lettering sculpture outside the Hirshorn.

A detail I haven’t noticed before in front of the Air and Space Museum are the following pillars. Each signifies an event in air and space history. 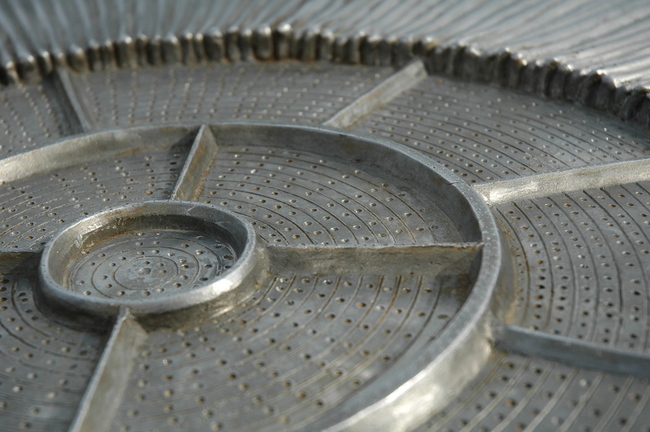 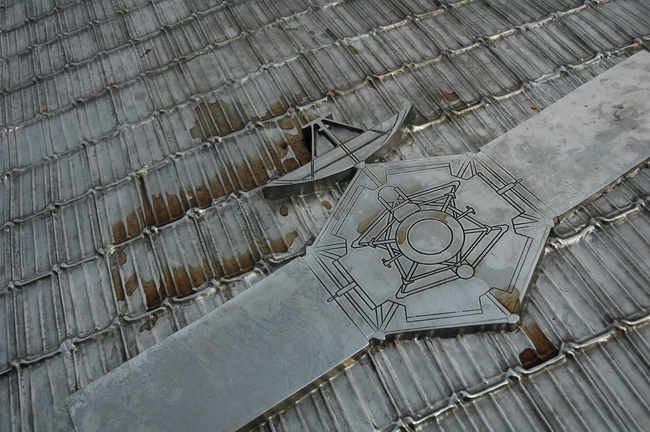 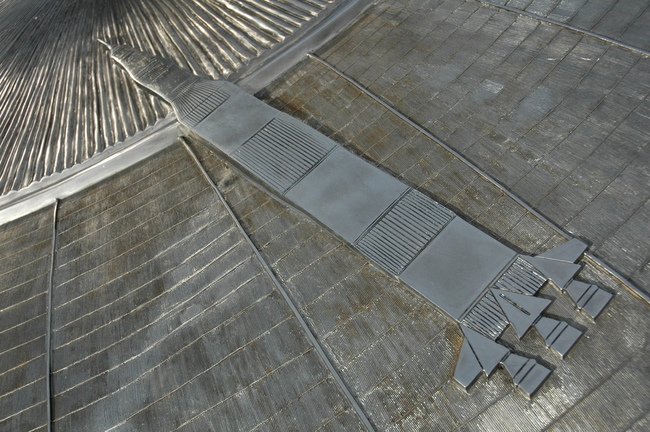 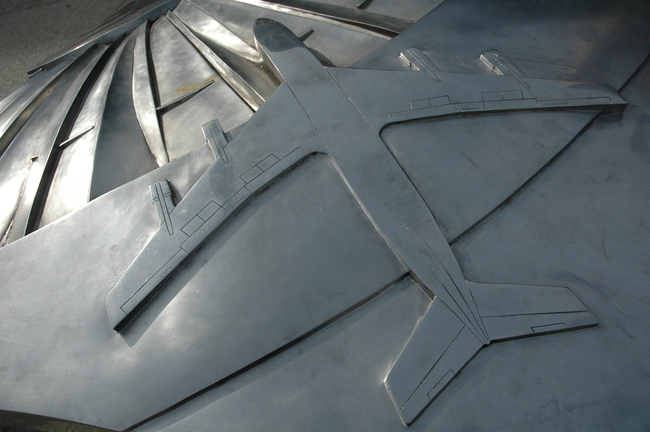 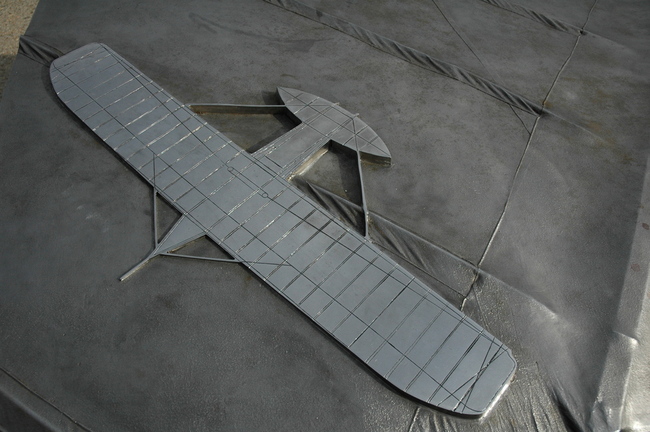 As I went further West the haze continued to throw its harsh light onto the Smithsonian Buildings. Fortunately this made for some interesting shadows in some alcoves. 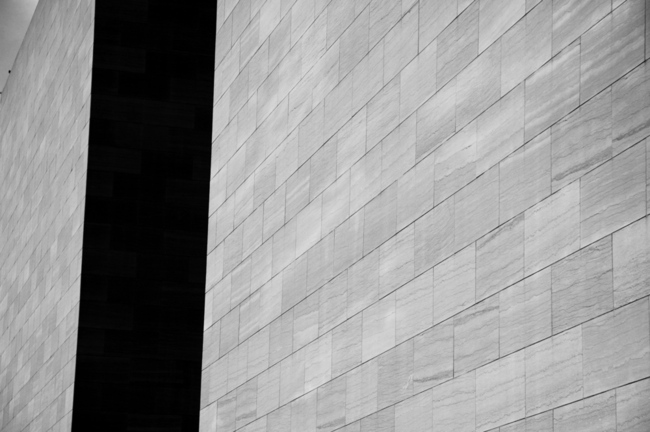 Stark shadows on the sides of one of the Smithsonian buildings

At the western end of the Mall is the US Grant Memorial and several surrounding sculptures. The haze prevented a good picture of the former, but here is one of the latter. 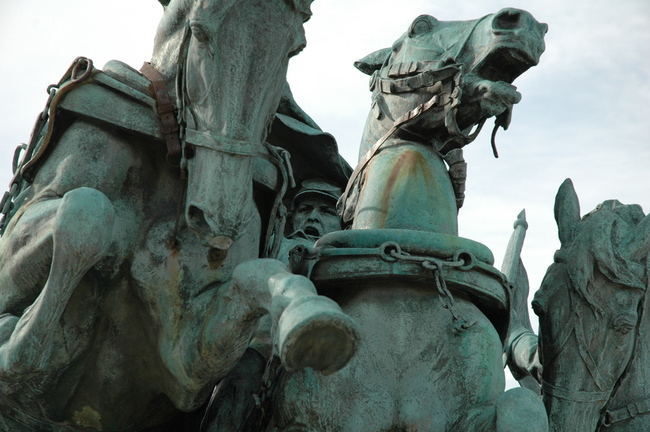 Sculpture directly in front of the Capitol

The cold breeze was still keeping people away as I approached the Capitol. 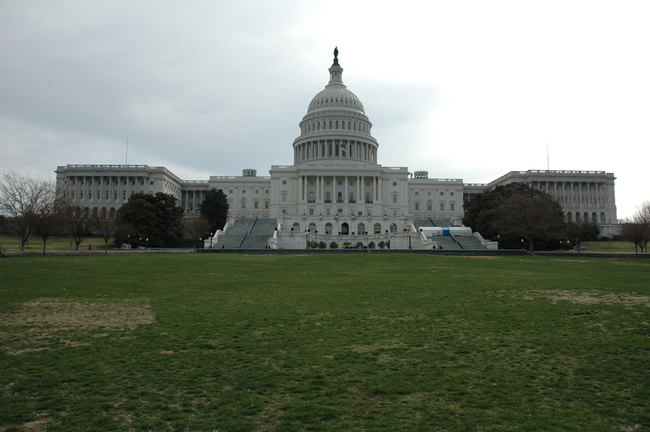 US Capitol Building on a hazy morning 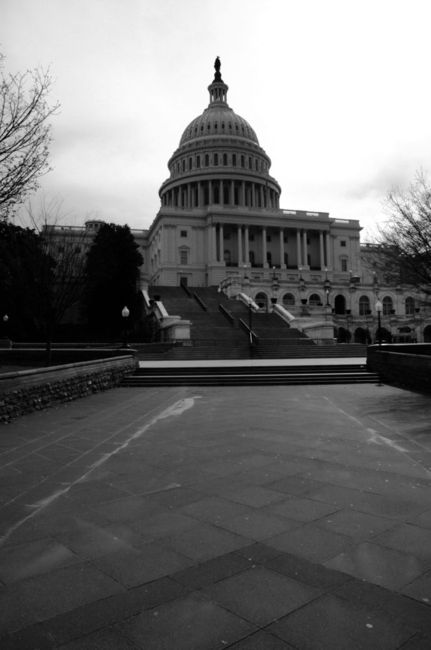 The approach to the Capitol from the Northeast 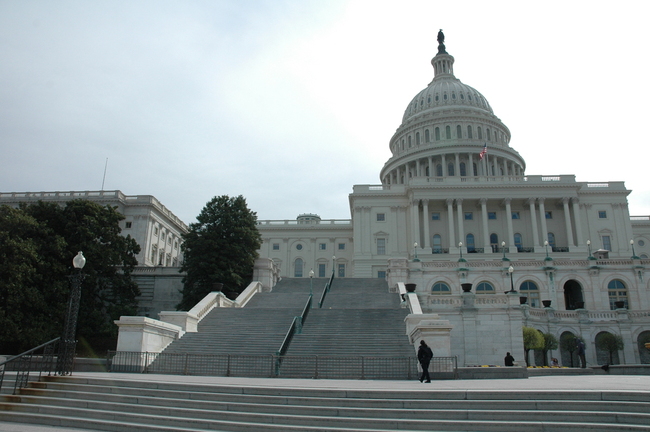 The Capitol is nearly devoid of tourists on this cold, hazy morning

Turning around and facing due East in front of the Capitol you can get a great overview of DC. I had to swap on my telephoto for this one. 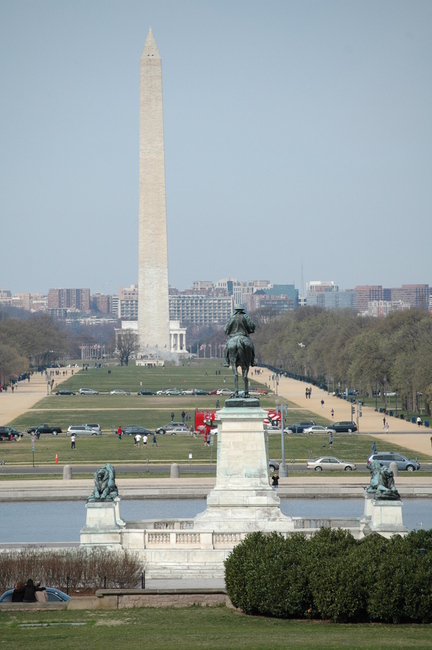 Looking East from the Capitol 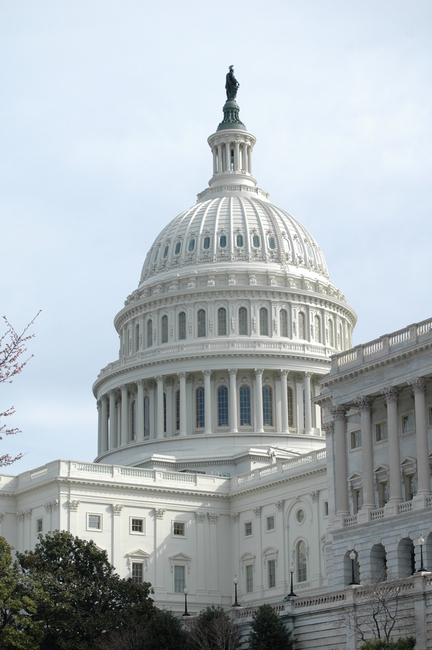 Walking around the front, a view from the Southeast corner 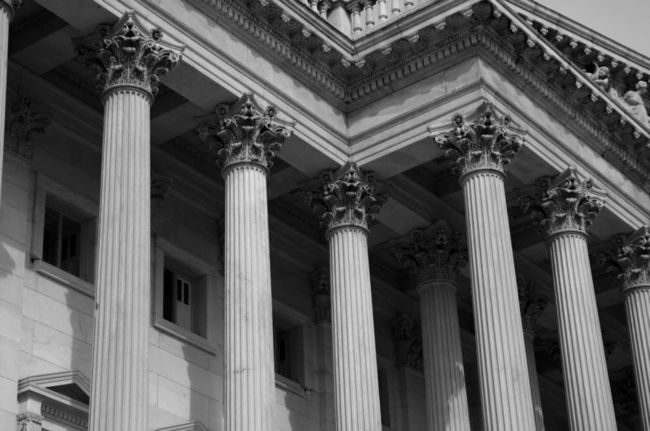 The pillars of the Eastern side of the Capitol

Stay tuned soon for part two of this series!