Most of us slept fitfully, but not terribly so. The common complaint was sliding down to the tail-end of the hammock in the middle of the night. Phil, on the other hand, had a somewhat different complaint: he had an animal (probably a deer) outside his tent from 1:30am until 4, keeping him awake. Extra clothes and even his own shoes pressed up against his ears did nothing to avail him of the noise. For me the sleep was much better than being on the ground, that is for sure!

We were slated to do about 16.5 miles from Bailey Gap Shelter to Rice Field Shelter. We started off from the shelter a little later than usual; it was about 8:50 before we were going in earnest. The day was mostly monotonous and slow going. Again we were confronted with rocks large enough to require thoughtful foot placement which added some misery to our already stiff muscles. Also contributing to the pain was a tough climb up Pine Swamp Ridge: 1000 feet of elevation gain in just 3/4s of a mile of distance. 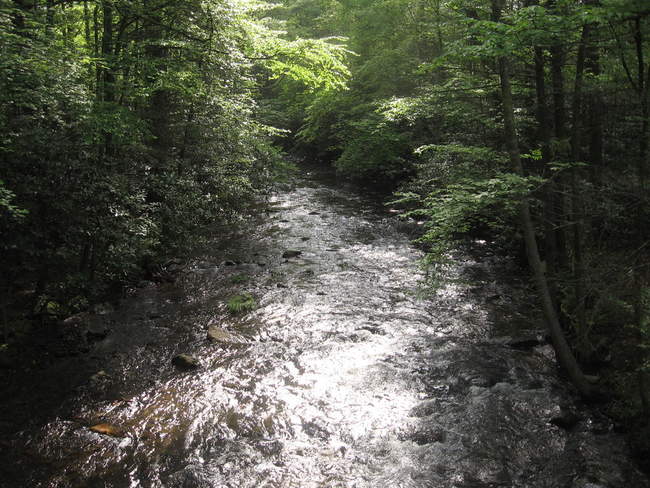 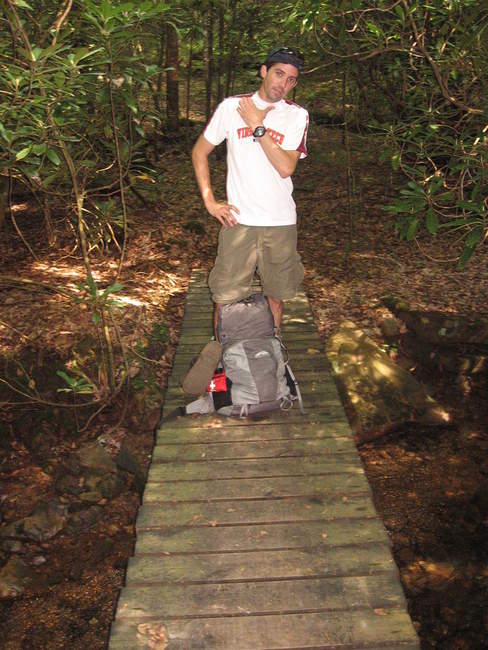 Tommy takes a break after a boring morning section

Along the way (after about 4 miles, to be specific) we passed the Captain’s house and got a view of the leftovers of the party held there the night before. Every year The Captain, a hiker-friendly guy, holds a party exclusively for hikers two weeks after Trail Days in Damascus. It’s an event that isn’t mentioned in any trail guides - probably by request. Although we passed on it the previous night we were regretting it in the morning: The Captain had all sorts of visitors in his yard, which was situated right next to a beautiful stream just off the trail. It was quite the setting and we felt we’d missed an opportunity to party it up. Unfortunately our bodies were just too worn out to make it the extra 4 miles the day before. 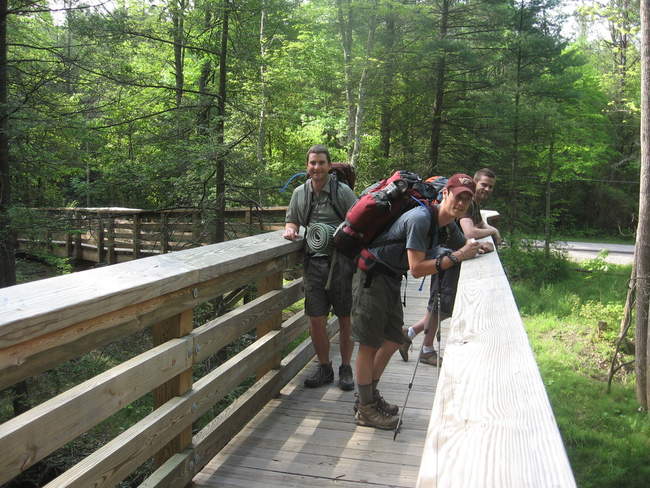 One of the few road crossings 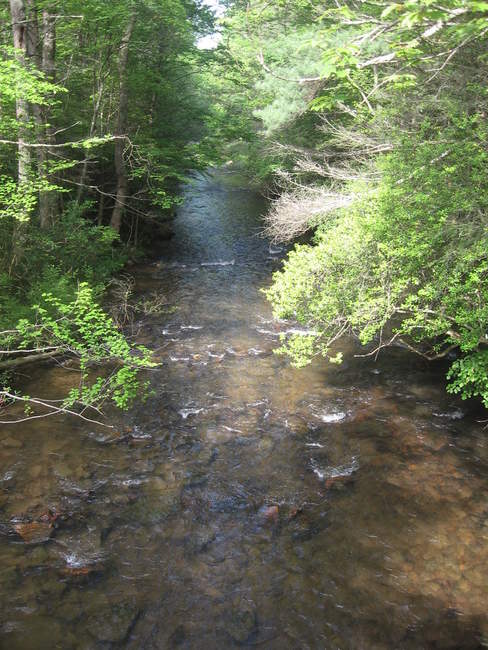 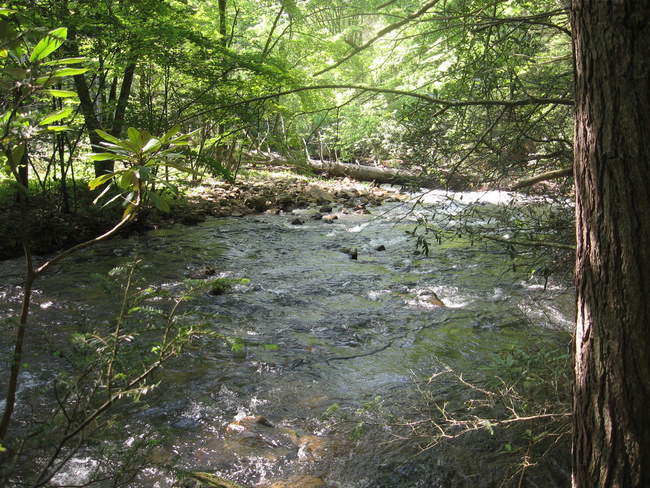 The stream is full and moving fast!

We walked uphill in the rising heat towards an open field that promised a good view of West Virginia. At the top of a crest we met with some resting thru-hikers who told us water was “just a mile or two” away, which gave us some hope. We relaxed for a while, drying our shirts and climbing up a tree to catch a bigger view. We talked a good bit with a guy named “Dry Clean Only” who was decked out in what appeared to be vintage hiking gear from the 1930s (heavy leather boots, safari hat, horn rimmed glasses, and a canteen). 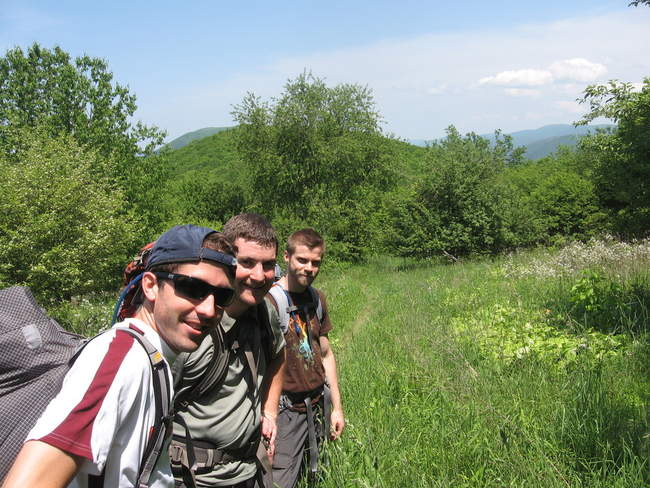 The team takes a break in a clearing 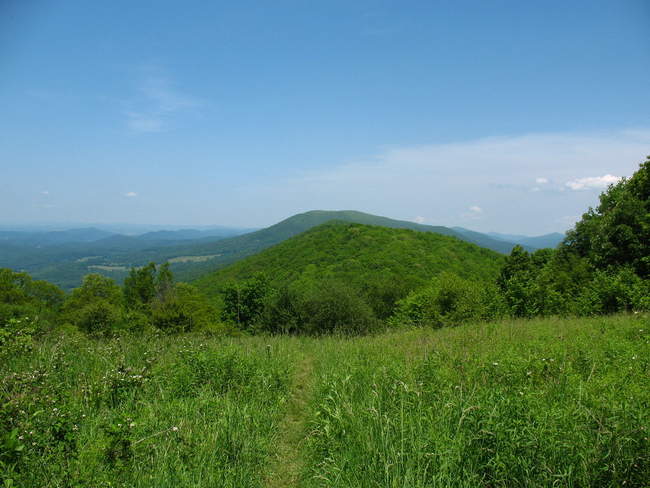 The view from a clearing 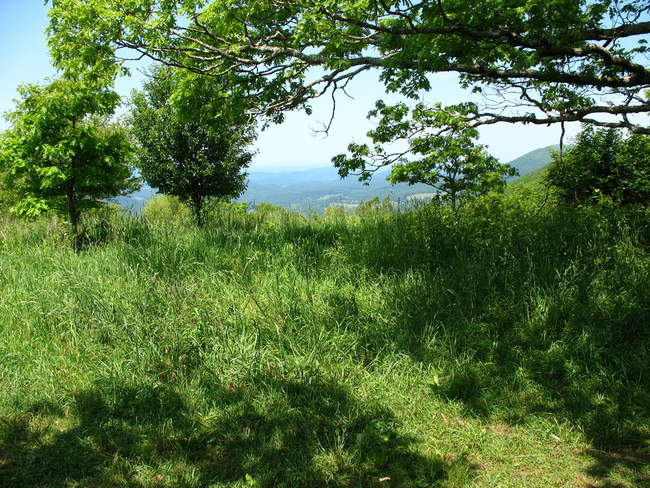 Beneath the tree everyone wanted to climb

Unlike the day before the trail was very dry. We were all down to a liter or less per person as we departed the crest of the hill. Unfortunately for us, as we’d soon come to realize, is that hikers are awful at predicting distance. It was at least 5 more miles before we encountered the water that was supposedly just around the corner. It became a running joke for the rest of the trip: everything now was “just a mile” away. 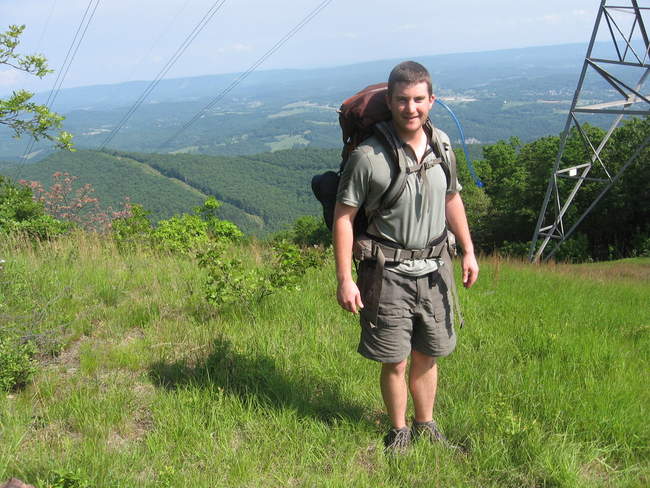 Scott under the power lines

Just a few hard-hiked miles after the water (a bug-infested spring) we crossed under some power lines and through a small line of trees. We emerged into a vast field that resembled a saddle (the area was bounded by two hills with a smooth dip in between). At the top we see the shelter we’re staying at just past the treeline. We stopped to take pictures as we climbed up the far side to the shelter, admiring the amazing view of West Virginia to our right. We relaxed for a few minutes and began to set up our hammocks thereafter - such a gorgeous shelter was bound to be crowded, and we wanted to secure comfortable sleeping locations! 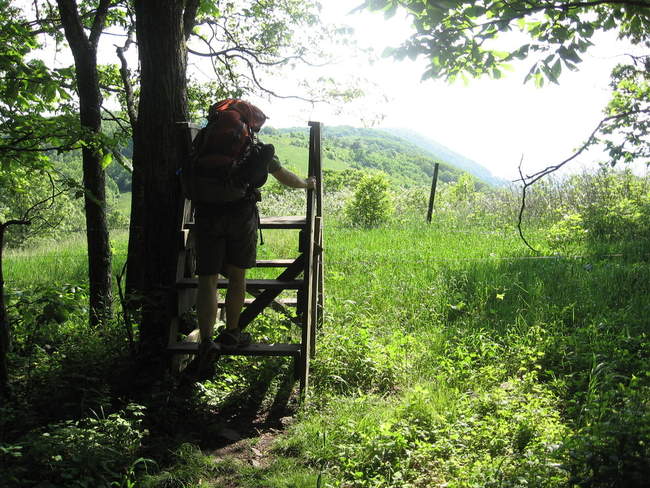 Scott climbing over an obstacle that leads to the saddle 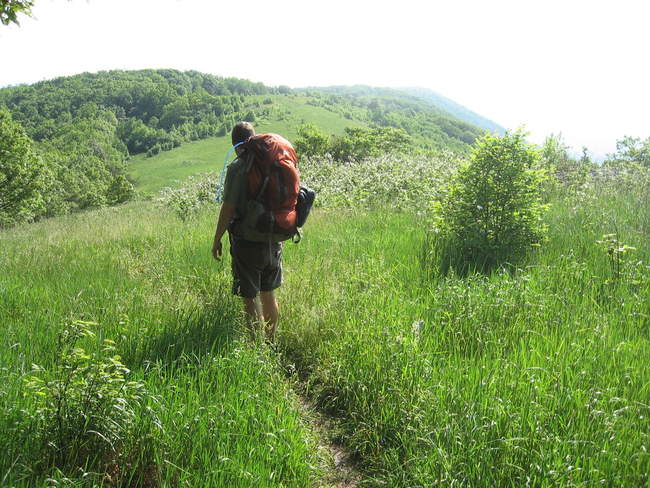 At the opening of the saddle. The shelter is on the opposite summit. 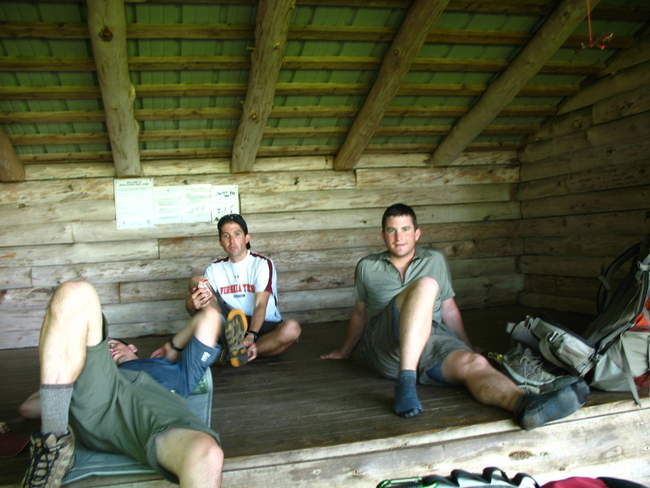 We spread out in the new-looking shelter 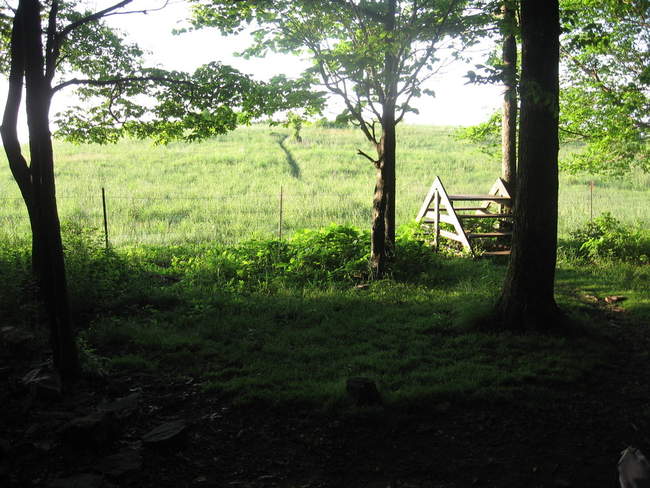 The view from the picnic table at the Rice Field Shelter 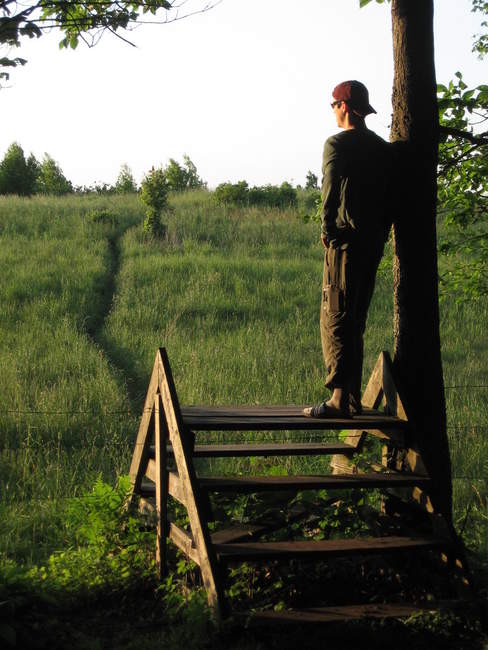 We all ate dinner and used the privy - the first we’d seen that was completely open to the air - before heading out to see the sun go down. Tyler, Phil, Tommy, and I went past the treeline to take pictures of the sunset from the saddle while Scott stayed back to strike up a conversation with a thru hiker who just arrived. As we were heading there we met an incoming party of additional hikers who were on their 5th annual outing as well. We chatted briefly and went to our individual spots to see the show. 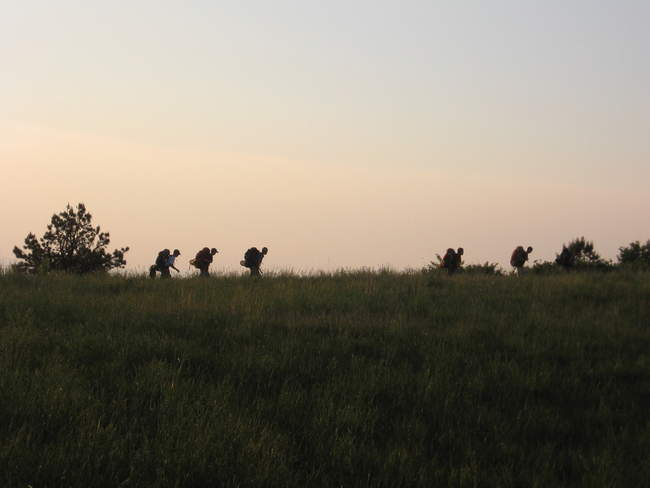 Hikers appear on the horizon, coming from the South 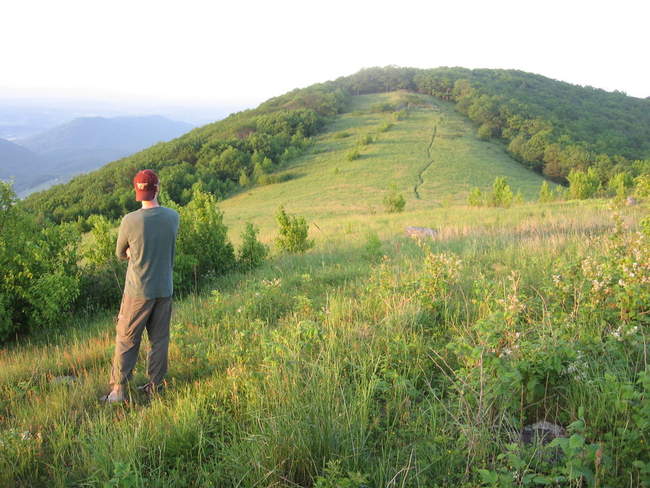 On the shelter side of the saddle, looking back on where we came from

The sunset was unlike any other I’d seen on the trail. It was truly unbelievable. Never before had I seen such an array of color paired with what appeared to be endless hills spanning the distance. Tyler snapped a bunch of pictures in sequence and I focused on getting a panorama to capture the scene with my limited memory card space. 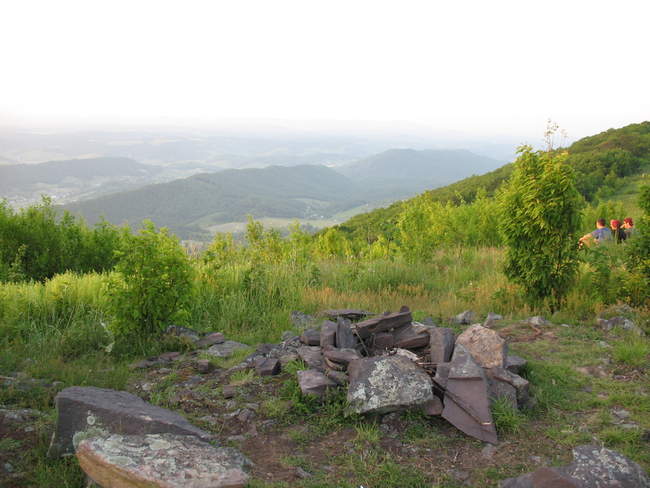 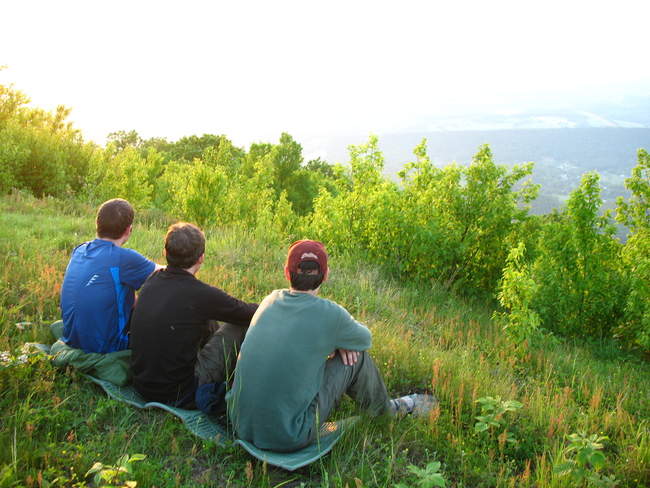 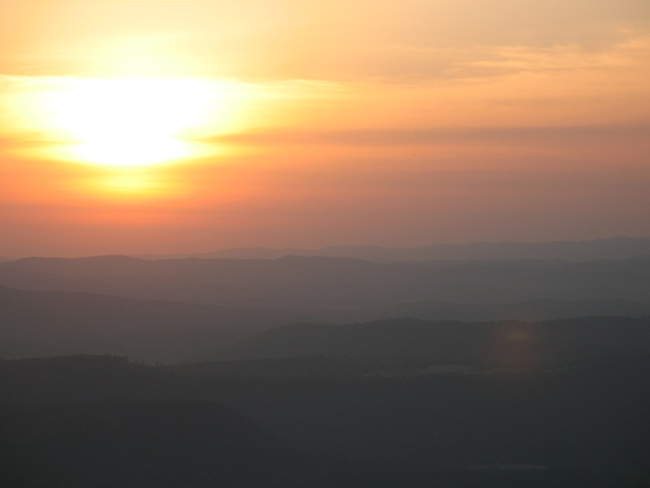 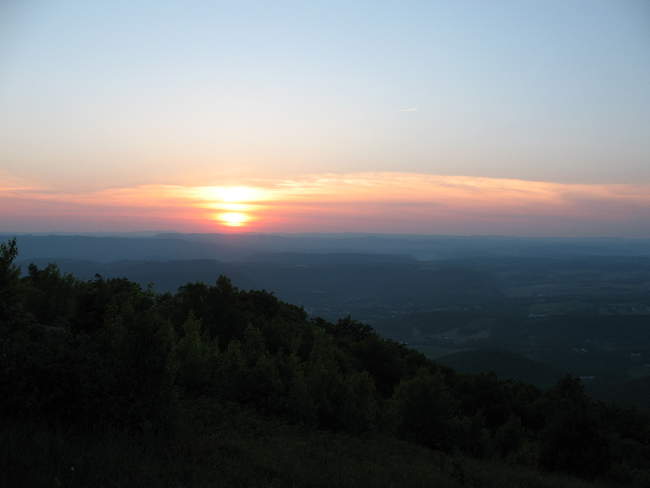 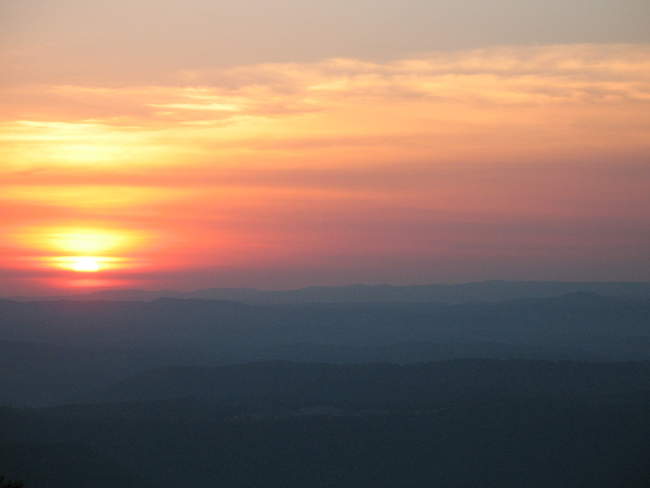 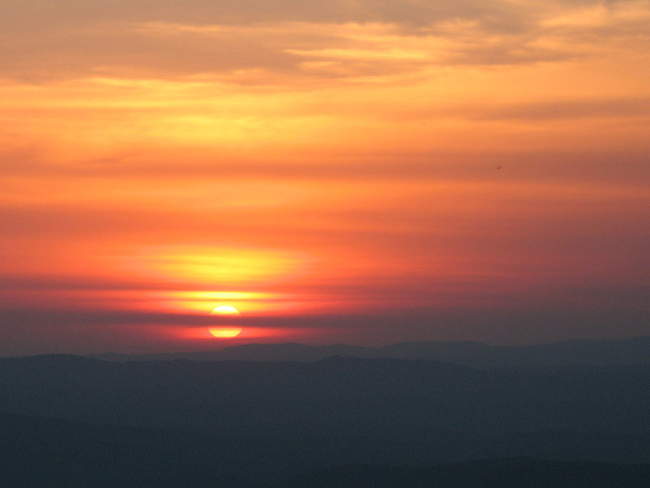 The day ends in a fiery sky

We came back to the shelter and chatted some more with the other section hikers before hitting the hammocks for some beauty rest. It was a long and mostly boring day that was justified in the end by the incredible scenery at the top of the saddle.

Pano of the saddle